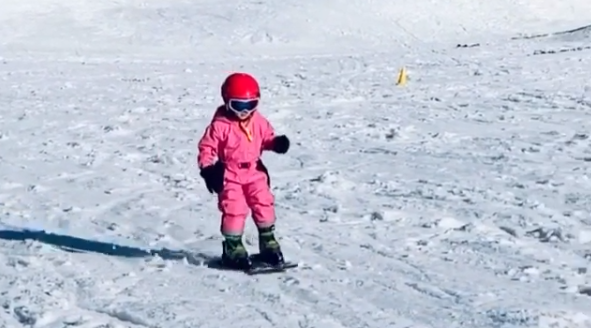 Who is Riley Busby?

Riley Busby is one of the many daughters of OutDaughtered stars Adam and Danielle. The couple rose to fame when they became the first in the U.S. to give birth to an all-female set of quintuplets. Adam and Danielle Busby also share their older daughter Blayke.

Riley is one of the “quints.”

The Busby family is currently under quarantine, but they recently took a skiing trip.

Adam and Danielle Busby along with all of their adorable little girls are currently doing their part to stop the spread of coronavirus (COVID-19). They are currently staying in at their home in Texas. Doing what they can to practice social distancing. They, however, recently took their girls to Wyoming. This was prior to the virus outbreak.

They enjoyed a family ski trip and a lot of snow. Adam Busby recently shared a video of Riley skiing. Interestingly enough, this was Riley Busby’s very first skiing trip. Knowing this was her first time amazed OutDaughtered fans. In fact, they really had a lot to say about it.

Fans recognize Riley as one of the more difficult quints.

As the quints continue to grow… They are all developing their own personalities. Ava and Olivia are the goofiest of the bunch. Hazel is recognized as the sweet one. Parker is shy. Riley is coined as the troublemaker of the bunch.

As Cheat Sheet reminds us, there was a memorable moment in 2017. A moment when Danielle had to scold Riley Busby for acting out. Riley intentionally turned a bottle upside down and spilled the contents everywhere. The behavior did not sit well with mama Busby.

“The girls are at that age where they’re really testing boundaries, so we’ve started doing time-out for when they’re bad. Though Riley is usually the naughty one, she really does have a sweet, cuddly side to her. She wants to do good, but her personality just kind of gets in the way,” Danielle explained at the time.

After a long day at the airport i grabbed anyone that was up for some fun in the snow with daddy. Olivia and hazel didn’t feel like getting all suited up again, so they stayed back in the hotel with Danielle. #outdaughtered #itsabuzzworld

Adam has also been known to call Riley the bossy one of the group. Fans have seen her boss her sisters around on several occasions.

She also gets a lot of intention for her intellect.

Danielle and Adam Busby suspect her intellect is part of why Riley acts out. They think she’s just bored. They claim her intelligence is “off the charts.” Danielle and Adam did make the decision to move Riley to kindergarten while the rest of the quints attended pre-K.

Initially, Adam and Danielle were nervous about sending Riley Busby to kindergarten. They, however, reassured their fans on social media she was doing a fantastic job.

Fans found the video of Riley Busby skiing to be refreshing.

So, many OutDaughtered fans found it refreshing to see the video of Riley skiing. Why? Well, partly because she seemed to be a natural at it! After all, skiing isn’t exactly an easy activity to master. Fans agreed the video was a testament to how talented, skilled, and intelligent Riley Busby is.

“Riley seems to be a natural in all she does. Wow, the muscle control she had to do that turn and remain standing was awesome and no poles. Maybe she’ll end up in the Olympics!” One follower exclaimed.

One of the clips of Riley skiing last week. This was her first day of ever being on skis! #itsabuzzworld #outdaughtered

Another chimed in: “Holy cow!!! even the stopping is impressive! I used to just fall to be able to stop! Wow!!!”

“That little girl is going to rule the world one day. What can’t she do?!” A third agreed.

Overall, OutDaughtered fans were beyond impressed by the video of Riley skiing. The question is… What did YOU think about it? Sound off in the comments down below!