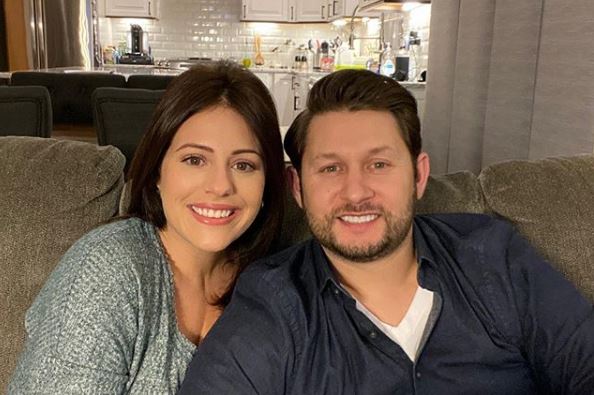 The Married at First Sight veterans on this week’s March 26 Couples Couch understand how very quickly the eight weeks go by before Decision Day, and it’s abundantly clear that some of the Season 10 participants in the arranged marriage experiment are more committed than others.  There’s only a little more than two weeksremaining for the five matches to decide on lasting love or a legal split.  The consequences are serious, but there was still plenty of sweetness to savor for the seasoned marriage pros on Couples Couch and two bold brides were brave enough to stand up for themselves.

The blow-by-blow commentary this week came from the original Married at First Sight success story, Jamie Otis and Doug Hehner, Season 5’s Anthony D’Amico, and Ashley Petta, Shawniece Jackson and Jephte Pierre from Season 6, and Season 9’s beloved Beth Bice and Jamie Thompson, who never hold back.  This Couples Couch couldn’t hold back for a second.

The smiles were everywhere as this week’s Married at First Sight episode, “Secrets and Lies” opened with Austin and Jessica out for a special dinner.  Precisely after Jessica confessed “I’m always hungry,” Austin asserted how much he liked everything about his wife, even the things that she considers unappealing.

“Say it!” Beth began to chant, with full Jamie support and she was not alone.  “He loves her so much,” Jamie Otis insisted, but at dinner, Jessica just couldn’t get it out, except to say that she was “there.”  It wasn’t the easiest of nights between the beloved nerds.  Austin is just starting out at his job, and he revealed that his work is going to require travel, sometimes for 10-day trips.  That kind of jaunt is hard on any relationship, much less a new marriage.  Jessica got quiet, but everyone had the feeling that they would come to an understanding.

Later, during a session with Dr. Viviana Coles, Jessica finally spoke, “I do love you, Austin.”  as Newsweek reported on March 25. He responded with a beaming smile, but not the same words in return.  “I’m just not ready to say it– I hope you understand that,” offered the groom.  Beth and Ashley voiced surprise, but actions speak louder than words, and Austin’s efforts to speak Jessica’s love language are loud and clear. Ashley teased that Jessica would be fine if Austin decided to be a house husband.  He would make dinner every night and unload the dishwasher– what could be better.

Michael has more issues with the truth

Meka is making an effort to be more tender with her husband, and the Couples Couch did notice the hand-holding right at the moment she told Michael she wanted to talk about finances.  She openly pulled out her laptop and showed him her work statement.  In return, Michael pulled out a supposed “offer letter” from his current job, chattering some gibberish about why his income was drastically lower due to taxes being withheld.

“Wait a minute, Michael, do you have a job?” Doug teased.  Jamie couldn’t wait to say how Michael probably had seven versions of those letters with different figures.

Meka wasn’t having any of this.  Questioning the “double-digit difference,” she spoke directly to the cameraman, telling him that she could not tolerate this deception.  She continued her rant out in the hallway, detailing the continual lying of her husband.  She said it was beyond what she could do, and then he needed professional help.  He never offered defense or explanation.

When Dr. Coles came for their session, Meka spilled everything– much to the giggles of Shawniece and Jephte– she’s not strong on decorum, but she’s doing her best.  Michael related that ever since he was young, he made up stories to make his mother, his adoption, and his life fit better, so as not to be ridiculed.  He definitely carries a sense of shame, but that inner feeling can never be eased by untruths. Dr. Coles told Michael that he was “dead in the water” if he couldn’t get serious and demonstrate a change in his relationship with the truth.  More cheers erupted from the Couples Couch, with the wives saying that they would have been long gone before now.

Meka took another step along the extra mile, meeting for lunch with Michael’s sister, who tried to explain the reasons for the behavior and stress that success would take the two of them.  This really is Michael’s last chance.

Mindy meets up with her girlfriends, and God bless them– they tell the truth.   They are astonished that Mindy and Zach opted to recommit on Recommitment Day.  As always, Mindy expresses that she does not want to give up on her marriage until she has made every last effort to save it.

She starts to justify and explain how Zach has really made an effort to spend “off-camera” time with her, but then things get sticky.  She explains that Zach tells her the secret that he would not reveal on their one-month anniversary.  Supposedly, he got the idea that her ex was picking her up at the airport following their Panamanian honeymoon.  No such plan was ever made, but Shanne remembered saying that to somebody—and Lindsay plays the manipulator again.

Mindy realizes that Zach not only lied to her again, but he is protecting Lindsay over her.  She determines to end the marriage.

Zach comes over, touting that he is “exhausted but happy” and wanting to “cheers” to their progress for the week. “I can’t cheers that” Mindy flatly responds, to another eruption of cheers from Couples Couch. She tells Zach that she knows about his lie, and who he protected instead of telling her the truth.  He tries to talk in circles again, about how he didn’t know “so much outside information” would cause such hurt.  “I want to end this marriage,” she says.  Beth Bice gives a shower of expletives as Zach and his dog leave the apartment.

Mindy seems refreshed in her strength when she talks with Dr. Coles, and Zach, on the other hand, seems to not understand that lying is wrong and lethal to any relationship.

Mindy throws a divorce party with all of her friends, and Anthony pulls a surprise on Ashley.  He unzipped his hoodie to reveal a foam set of “Zach abs” that tickle his wife far more than her crush on the Zach ever did.  She giggled for the rest of the Couples Couch. All the hubbies hoped that Mindy saw Zach every time she punched a piñata.

Not even Couples Couch can make heads or tails of Katie and Derek or Brandon and Taylor.  When things are good between Katie Conrad and Derek Sherman, it seems they can’t get any better.  The couple’s tender makeup last week left them back on solid ground.  While every couple let out “awww” Jamie Otis shrieked “they’re so cute.” She even compared Derek’s backward hat to Doug’s.

When the two were taking a stroll through Derek’s teen memorabilia, though, Hehner and the other husbands chimed in that Katie would be mad.  She teared up upon hearing her husband’s freshman high school poetry—relating how he never got so deep with her.  He described that the words came only from his envisioning “what could be,” but not every wife believed that.  Shawniece got laughs from the huge life-size portraits that Derek’s mom bought.  She also saw how Derek’s dreamer side balances out Katie’s practical life disposition and encouraged them through the screen.

Jephte and  Shawniece played Couples Couch basketball with Taylor and Brandon until Jephte pulled his wife’s ponytail.  Jamie Otis seemed most surprised at the “turnaround” made by this couple, but it’s hard to trust anything they do.  They at least spent a peaceful night together, and judging from reviews, it may be their last.

The night ended on a tender note, with Austin and Jessica at the beach, writing letters to their younger selves.  Austin counseled his college self on being more dedicated and understanding that life doesn’t give a redo.  Jessica’s self-reflection was centered on speaking and acting out love, and she said she was glad she told Austin that she loved him, even if he’s not ready to say the words yet. Jessica should tears as she remembered her grandmother, and Austin gently kissed her shoulders.  Growing into love is worth the time, just look at Couples Couch.