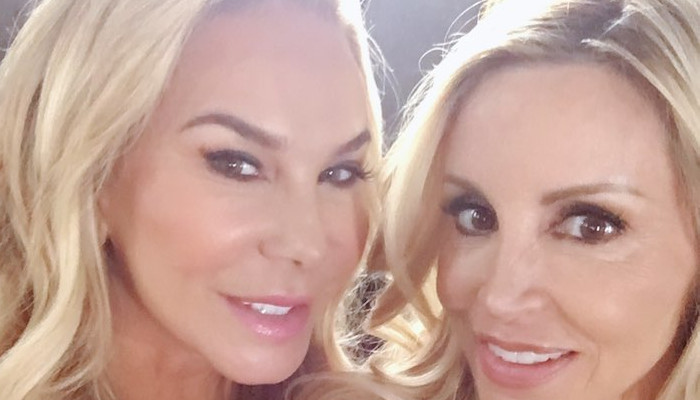 Ghosts of Real Housewives past are back to haunt Brandi Glanville. Ahead of the new season of The Real Housewives of Beverly Hills, Camille Grammer is denying an old rumor. During Season 3, Lisa Vanderpump and Brandi confronted Camille and Adrienne Maloof with serious allegations.

Did Camille and Adrienne plot to take down Lisa at the Season 2 reunion? Brandi and Lisa say yes. Former RHOBH stars Camille and Adrienne denied it back then. When a fan brought the old rumor to the surface on Twitter earlier this week, Camille doubled-down on her denial.

According to Brandi, there was a dinner attended by Camille and Adrienne, where they plotted to take down the SUR owner. Camille denies a dinner ever taking place.

However, she does admit that someone familiar to the show invited her to a “get together” to discuss what was going down that season.

That was a lie. Brandi Lied. Brandi knows who called her.. it wasn’t Addrienne. Addrienne didn’t call me. A husband of a housewife called to have a get together and discuss what was going on. No take down.

Reality Blurb reports that Camille is adamant that Adrienne wasn’t the one who called her. She didn’t say who, but she did say it was a “husband of a housewife.”

Camille ‘Disappointed’ With Lack of Footage Filmed for RHOBH

The Club MTV dancer had an exchange with a fan regarding her appearance on the upcoming Season 10 of RHOBH. A fan asked if Camille will be on and expressed a wish that Camille could have a diamond again.

In response, Camille wrote that she was only asked to film a few scenes a “couple of months” into filming of Season 10. She said that she thought she would have a bigger role after bringing the drama at the Season 9 reunion.

However, Camille revealed that Bravo never got back to her about filming any one-on-one interviews. As such, she doesn’t believe she will feature much.

TV Shows Ace reported in late 2019 that Camille thought the other ladies would target her during Season 10. However, more recent reports and Camille’s tweets reveal that’s not true.

Based on the RHOBH trailer, the spotlight will be on Brandi’s allegations of having an affair with co-star Denise Richards. The Wild Things actress and her husband, Aaron Pyphers, have several confrontations with various RHOBH stars in the short trailer.

Denise has denied having an affair with Brandi. Camille backs Denise up, saying Brandi is a liar who made it all up for airtime.

Fans will have to decide the truth for themselves.

The Real Housewives of Beverly Hills returns to Bravo April 15.