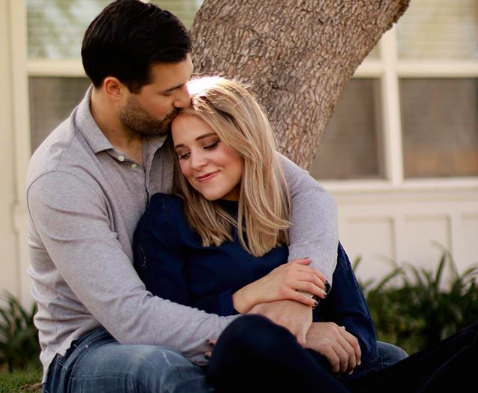 Counting On fans are back at it! They have taken to Instagram to speculate on whether Jinger Duggar Vuolo is expecting baby number 2.

The internet lit up again with Jinger pregnancy rumors. The rumors started in her Instagram comments after fans spotted a cryptic hashtag on one of her posts. On Friday, March 20, the Counting On star took part in a musical challenge that’s going around. Now it is days later, and that caption still has fans theorizing.

Jinger captioned her post, “[I’m] joining in on [the] @swan4kids_pa challenge to play ‘He’s Got the Whole World in His Hands. I’m challenging @janamduggar [and] @chad_erinpaine to do the same!

Would love for you all to join in as well! Post a video of yourself singing or playing, and tag @swan4kids_pa #healthyfitpregnancy. Challenge two others to do the same.” She also added the hashtags #wholeworldsings, #music4kids, #musicchallenge and #swan4kids.

Now, of course, fans took notice and zeroed their attention in on that #healthyfitpregnancy hashtag. The hashtag stood out like a sore thumb because it really has nothing to do with the challenge.

Jeremy’s mom Diana is one of the people involved in the Swan 4 Kids organization. So, she naturally took part in the challenge. But, Diana’s original post with Jeremy’s sister did not contain any similar hashtags. Overall, none of the posts in the #wholeworldsings hashtag make any mention of pregnancy aside from Jinger’s.

Since Jinger first shared the post on social media, she has since removed the questionable hashtag. This may have been a result of all the questions she received.

Back at the beginning of the year, Jinger posted Instagram pictures from the surprise birthday party Jeremy threw for her in December. In them, she is wearing a red-and-black floral dress with a high neckline.

Fans loved the Counting On star’s dress, but quickly began to wonder if the dress was being used to hide something. Perhaps a baby bump? Both before and after that, the pregnancy rumors never really seemed to stop coming back around. You can pretty much find a congratulations comment on any of Jinger’s posts from a fan since then.

Except now, some fans are trying to shut down the rumors. “Please let everyone know that you’re not pregnant,” one user commented. Another said, “I’m getting quite tired of people assuming that you are pregnant again when you’re not.” But another commenter snapped back at Jinger’s defenders saying, “She’s the one that used the #healthyfitpregnancy [hashtag].”

There still has not been a clear response from Jinger and Jeremy themselves on whether there is a bun in the oven. But, it seems that after the post made headlines, Jinger removed that portion of her post. That could be a hint that she’s hiding something. Or, maybe she used the hashtag for some mysterious reason.

Let us know your thoughts in the comments below! Do you think the Counting On couple has been hiding baby number 2 all year long?