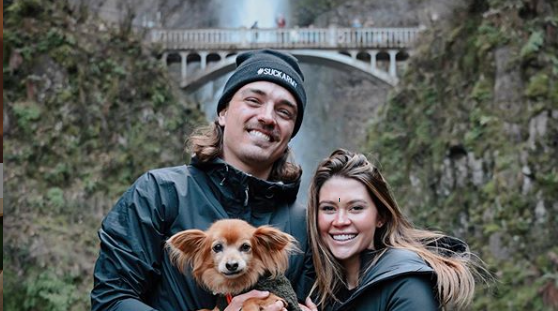 Caelynn Miller-Keyes and Dean Unglert are still going strong after their time on Bachelor in Paradise. One of the cool things about the couple is they live in their van. The couple has a blog where they talk about where they are traveling and the cost of their trips.

Who can forget the adorable video when they first started dating where they gave a tour of the van? “Got a good weighted blanket for your anxiety for dating a guy that lives in a van,” Unglert joked. Now that the two are, “qurandeaned,” together it seems maybe they aren’t in the van.

One reason they may not be in the van right now is that Dean had a really bad accident. He fractured his femur and dislocated his hip during a skiing trip. He had to have surgery and there is now a plate and five screws in his hip. It is easier to recover when you’re not living in the small space of a van and traveling all around.

One of their co-stars, Jared Haibon, said, “once his leg heals, I think he’s going to go back into living in the van. He’ll still have this nomadic lifestyle. Jared went on to say he thinks he just wants to be around Caelynn no matter what according to The Cheat Sheet.

Ashley Iaconetti said before all the craziness of the virus started, “they are kind of moving in together. It’s Caelynn’s place, and Dean travels all the time. Whenever he’s going to be here in a home base, he’ll be there.”

Eagle-eyed fans of Dean Unglert and Caelynn have been paying attention. On the 19th she posted a picture of Unglert and her dog from her apartment. Then later she said she was, “quarandeaned,” which doesn’t make sense if he isn’t there.
For Dean, he posted a video to his story of Caelynn exercising in her apartment. The two continue to be the cutest couple from BIP on Instagram.

While I’m qurandeaned, I’m looking back at the time we did a terrible job at hiding our relationship 😬

Caelynn posted this picture and said, “I’m looking back at the time we did a terrible job at hiding our relationship.” Fans are happy they are still together whether they’re in a van traveling or staying inside. It’s yet to be determined if fans will have a new Bachelor in Paradise to watch this summer. The Bachelorette has postponed production. Fans may need these little snippets of their favs to keep them going.