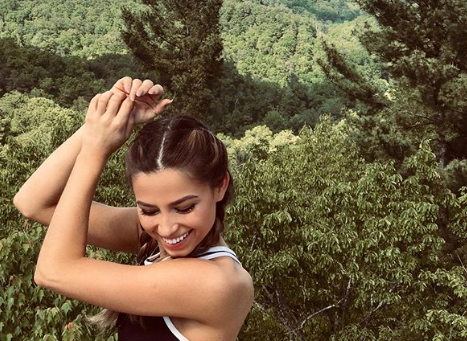 Kristina Schulman of The Bachelor is someone who draws a strong reaction from people. It can be a good reaction or a bad one. She started out as one of Nick Viall’s contestants, but got the boot early on. Then, she went on to Bachelor in Paradise twice. Now, a follower is dragging her saying she copied two well-known BIP alums; Dean Unglert and Caelynn Miller-Keyes.

What Did The Follower Say Kristina Schulman Did?

Kristina Schulman found herself caught up in a love triangle with Dean Unglert and Danielle Lombard on the fourth season of BIP. Schulman left after Dean went for Lombard. Blinded by a pretty face, she didn’t feel like Dean made her a priority. The two made up and continued to date after the show. They broke up sometime later and Dean went onto BIP again.

His current girlfriend Caelynn Miller-Keyes was also on BIP. Dean left when he got close to her and then he came back. Now, they live in a van and are Instagram darlings. They often post pictures of their adventures. They also blog about cost and let fans know where they will be going next. Recently when Schulman posted some photos of her enjoying nature while quarantine was happening, a fan was mad.

onto week #2 of self quarantine. by staying in, we are hoping to make the job a bit easier for all our health professionals. THANK YOU for all that you do 🖤

What Did Kristina Say To The Follower

Schulman posted a picture of herself out in the fresh air going for a walk. The follower asked Kristina Schulman, “why are you copying Dean and Caelynn?”Schulman asked if they meant anyone in nature was copying something that’s been around forever. According to The Cheat Sheet, the follower came back saying they were exploring nature during the quarantine and, “just find it a bit odd you were doing exactly the same.”

Another follower said, “there are millions of people exploring the outdoors everyday. It’s not just because it’s quarantine time.” Many followers agree.

Sculman said, “I don’t know how to respond to that except that it is completely normal to go out and take walks in nature.”

Bachelor stars get criticized all the time, no matter what they do. Since it is a ridiculous accusation, fans are glad Kristina showed she’d stand up for herself. Fan are looking to their favorites to give them hope and keep them inspired through the Coronavirus pandemic. Kristina was just sharing her joy being outdoors.

Do you think she should have been blasted for copying? Do you like that she stood up for herself? Sound off in the comments down below.