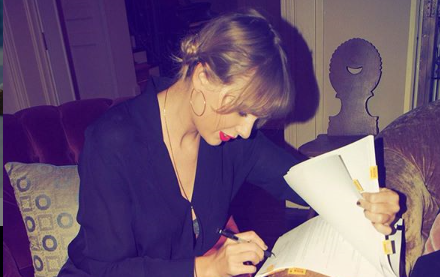 Taylor Swift fans finally feel vindicated for siding with their queen against Kanye West. Not only did he and his wife, Kim bully Taylor for saying she didn’t agree to a lyric he included in his song, but they called her a snake.

Four years ago Kim Kardashian started a feud when she posted snake emojis in reference to Taylor Swift. She posted clips of a phone call with Kanye West that proved Taylor Swift had approved the lyric Kanye put in the song about her. But now, that whole phone conversation has leaked.

I want to say a massive thank you to my main team in putting this whole thing together: Jil Hardin, our producer, worked tirelessly and truly made me feel like I could do this. Joe ‘Oz’ Osborne, our excellent AD, and I have worked together for years and he’s the coolest. Rodrigo Prieto, our DP/cinematographer, is absolutely brilliant and down to earth and hilarious. Ethan Tobman created all those sets. Like, that wasn’t a real yacht. That’s how good he is. 🤯👏

In the leaked audio Kanye called up Taylor Swift. He told her he had a lyric about in his song he needed to run by her. He said, “so my next single, I wanted you to tweet it.. so that’s why I’m calling you.” He said there’s a controversial line in it about you according to People.

Swift asked if it was going to be mean. He said it was crazy but just to prepare. Kanye said the lyric was, “I feel like Taylor Swift might owe me sex.”

In the actual song that came out, the lyric is, “I feel like me and Taylor might still have sex. I made that b**** famous.” In the leaked audio Swift said the part about owing him sex wasn’t mean, but she was hesitant to promote for him. She said it would add a level of criticism.

Kanye Claimed To Be The Reason She Was Famous

Kanye also asked her what she would think if he said he made her famous. She said, “Did you say that? Oh God, well, what am I going to do about it at this point.” She said he had to tell the story the way it happened to him. She said it didn’t matter she sold seven million of the album before you did that.”

Taylor Swift told him you didn’t know who I was before, so she wasn’t admitting he made her famous in any way. She was referring to when Kanye grabbed the mike from her after she won for her video. He told her, “I’m going to let you finish, but Beyoncé had the greatest video of all time.”

When the song came out she told her fans she didn’t know he was going to say the word b****.” Kim Kardashian released snippets of the phone conversation and told the internet Taylor lied. Taylor immediately told her fans on Instagram that they weren’t being truthful and calling her a snake. Now with the full phone call leaked, they can see she was telling the truth the whole time.