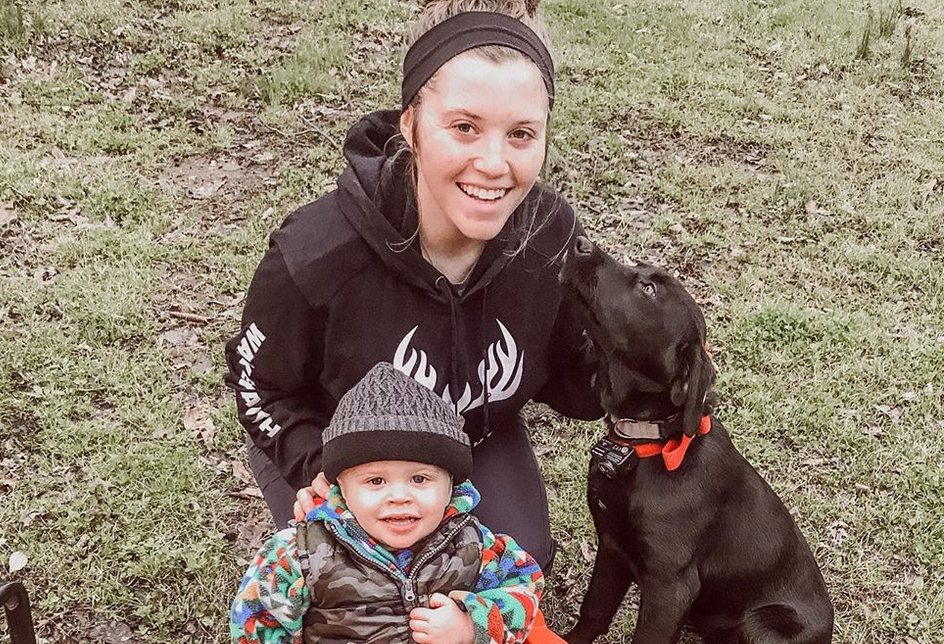 As TV Shows Ace reported, Joy-Anna Duggar and Austin Forsyth got a dog in February. The family named her Brielle and said she’s a black Labrador Retriever. From what the Forsyths have shared on social media, it seems like the dog is very loved. Gideon, 2, seems to be obsessed with her. When Joy-Anna and Austin revealed that they got a dog, they said that Gideon calls her “B” for short.

Duggar fans were excited to see the news that they got a dog. Many people gushed over how cute Gideon looked beside the new puppy. Of course, they thought the puppy looked so cute too. Some of them, said the photos made them want to get a puppy of their own.

Now, it’s been a little while since Joy-Anna and Austin shared about Brielle. But, they took to Instagram recently to share that they’ve been spending time outside. They also revealed that they’ve been quarantining for a few days now. The pictures they posted feature Joy-Anna, Gideon, and Brielle outdoors.

In response to the post, lots of Duggar fans left sweet comments. They love the picture of all three of them outside. This is the first picture they’ve shared since announcing they’re expecting. So, the Bates family commented and said that Joy-Anna is glowing. But, some of Joy-Anna’s followers were quick to notice something they didn’t like about the picture.

Brielle’s collar got a lot of attention on the post. Someone commented, “Please tell me that isn’t a shock collar on the puppy.” Another Duggar fan wrote, “That puppy is too young for a shock training collar.” To this, Joy-Anna wrote, “Her collar is for our wireless fence. I did the proper training for her and since she knows her yard boundaries, she won’t get shocked.”

Based on what Joy-Anna and Austin have shared on social media, it looks like they spend a lot of time outside. And, they have a good amount of space to explore. So, Joy-Anna’s explanation makes sense. They want to let the dog run around and play, but, of course they don’t want her to run off. She could get lost or injured. So, the invisible fence seemed like a good choice to them.

Can you believe Joy-Anna and Austin are getting hate over their dog’s collar? What do you think of Joy-Anna’s response? Share your thoughts below.