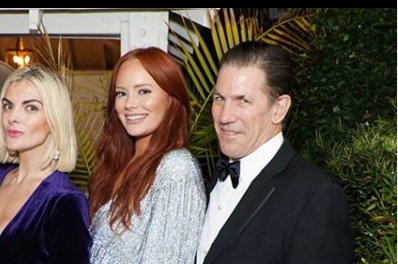 Thomas Ravenel and the crew were finally getting into the swing of Season 7 and then the virus hit. Southern Charm is still on hiatus because of the Coronavirus. It seems Thomas Ravenel has another baby on the way with an ex-girlfriend.

This would be the third child for the reality star. He has two others with ex Kathryn Dennis; a six-year-old daughter and four-year-old son. Now, according to several sources, his ex-girlfriend Heather Mascoe is pregnant with his child.

Who Is Thomas Ravenel’s Ex-girlfriend?

Thomas Ravenel’s ex-girlfriend Heather Mascoe is a thirty-eight-year-old nurse. Reports are saying she’s due in June. According to The Daily Mail there is a news crew camped outside of her house.

Heather also has two children with her ex-boyfriend Leo Chiagkouris. The sixty-year-old is a part of the Charleston elite. Leo hung a banner slamming Thomas according to sources after he learned the Southern Charm star spent the night while his children were home. A picture of the banner showed Thomas’s mugshot and listed his charges. The title said “Keep This Guy Out Of Your House While Minors Are Sleeping.” Her ex also launched a petition online about Thomas’s criminal background.

Before when news sites reached out about the pregnancy, they weren’t answered according to The Reality Blurb. Thomas hasn’t had very much good press in the past. The custody battle with Kathryn lasted forever and they drug each other’s name through the mud. Thomas recently said he regrets the pain he caused. On Twitter, he says, “Regrettably, I’ve not been very adult like in many past decisions. I’ve lacked self discipline and have behaved as a child.”

I've said it before and I'll say it again, Sunday Polo never disappoints.

Thomas Doesn’t Want The News To Be Public

A source says Thomas Ravenel is trying to keep the pregnancy quiet. The source says, “he’s told Heather not to go out and even people who know are afraid to say anything because Thomas is so aggressive when he is crossed.” Kathryn is aware of the situation according to the source, thanks to her lawyer sharing the information with her.

Rumors are always circulating that he was getting back together with his ex-girlfriend. These claims picked up once the new season of Southern Charm started filming. Despite being seen together and spending Christmas together, the two were simply making nice for their children. Thomas talks about whether they were getting back together. On Twitter, he addresses the situation, saying, “No, we’re doing some things together because it makes the kids very happy to see us getting along.” He adds that they see eye-to-eye on this situation.

‘Sister Wives’ Fans Have A BIG Question For Meri Brown: Too Personal?
‘American Pickers’: Frank Fritz Did Rehab Before Getting Fired
‘The Bachelorette: Men Tell All’ Spoilers: Now Deleted Clip Reveals Katie’s Final Three
Lisa Rinna Stars In New ‘Days Of Our Lives: Beyond Salem’ For Peacock
Stream This: Lucy Lawless Back For ‘My Life Is Murder’ On Acorn TV, Preview