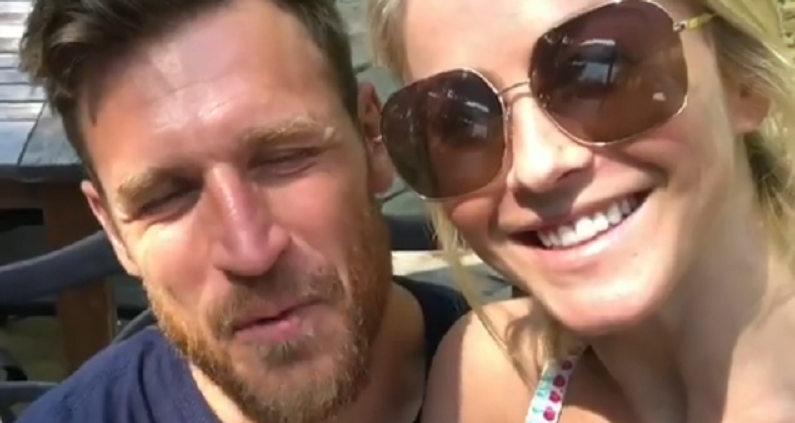 Julianne Hough and Brooks Laich are stuck together these days. The couple can’t work, travel, or even get out of the house due to the coronavirus pandemic. The state of California is currently in a lockdown. So, Julianne and Brooks are practicing social distancing together.

They have been “spending more time together” than they have in months. The coronavirus has caused an increase in divorce rates because married couples aren’t used to being together 24/7. But it has had the opposite effect on Julianne Hough and Brooks Laich. They found that their marriage has gotten better because of it.

But they’re kind of forced to work on things. The couple is home together and have been practicing social distancing. They can’t ignore the elephant in the room. So, they’re making good use of this time by working on their marriage.

Together we dance. Together we express. Together we feel. ❤️ I partnered with @GlblCtzn and @WHO yesterday morning to bring you a mini @kinrgy experience to help support #TogertherAtHome. KINRGY is about expression and connecting back to our most authentic selves, and I couldn’t think of a better time than right now to guide you through this experience as we’re navigating these uncertain times. Please enjoy this taste of @kinrgy and go to globalcitizen.org/coronavirus to take action to stop the spread of coronavirus.

“They are spending more time together and seem happy,” the source said. “They actually seem to have figured out how they can stay married. Both have had to make changes, Brooks especially so.”

The insider revealed that things were worse back in December, but “Brooks refused to give up on their marriage.” The dreaded D-word wasn’t even on their minds. Brooks felt that they needed “to figure out what needed to change, so they could both be happy.” Julianne and Brooks are aware they don’t have a traditional marriage, but they want to make it work.

As per Us Weekly, Brooks Laich and Julianne Hough have been baking a lot lately. They decided it was also a good time to have a bake-off. The former hockey player shared their quarantine diaries on his Instagram Story on Thursday, March 19.

“I have no idea who gave me this bada** apron with my own name on it for our wedding, but it’s going to help me in bake wars right now,” Brooks said as he put on his apron. “I’m gonna out-bake my wife.”

He then revealed that he was going to bake his “mom’s signature poppyseed slices,” which he was his “favorite dish as a kid.” The couple seemed to enjoy their time together in the kitchen. They were flirty and all smiles with each other.

As per People, Brooks Laich has been cooking up a storm lately. He took to his Instagram Story to show off the impressive feast he made for Julianne Hough. It included an array of food, such as turkey bacon, scrambled eggs, smoked salmon, and stacked pancakes. Brooks joked that practicing social distancing has made him “better at cooking breakfast.”

Let the “Social Distancing Olympics” begin! Event 1 – Bake your favorite thing that your Mom ever made you! How good does this Poppyseed Slice look?!? My mom @janelaich makes this all the time, especially when she knows I’m coming home for a visit. Wanted to give it a shot today, and I must say I think it turned out pretty good! I award myself the Gold Medal, and look forward to Event 2! 🥇🇨🇦 #aprongamestrong

He seemed excited over the thought of making Julianne the perfect breakfast. Not only did he show off his food, but he also explained the process it took. Since Brooks messed up the pancakes on the first try, he made them again to ensure that they were just right. He just couldn’t wait to see Julianne’s face and she was sure pleased.

It looks like Brooks Laich and Julianne Hough are doing just fine these days. What are your thoughts on the couple? Sound off below in the comments section.