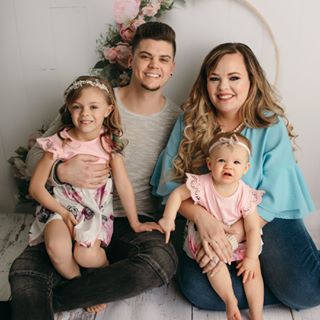 Celebuzz reports on an article found on Catelynn Lowell’s Instagram bio that Carly will be on Teen Mom less.

The Dynamics Of An Open Adoption

MTV follows middle-school sweethearts, Catelynn Lowell and Tyler Baltierra throughout their life. Originally on Teen Mom, the family is now on Teen Mom OG along with their daughters, Novalee and Vaeda.

In the past, fans have been able to catch glimpses of their eldest daughter, Carly. The couple lovingly gave her up for adoption since she was born when they were teenagers. Not only did they make a decision wise beyond their years, but they were also fortunate to find an adoptive family that was open to let them remain a part of their daughter’s life.

In recent Balterria family news, Catelynn told E! News that she and Tyler would only go to visit Carly in the summer…which would cause problems filming.

Catelynn also says, “Obviously [Carly] is part of our story. So when things come up on camera, we talk about her as much as we can.”

Other issues with the open adoption and Teen Mom OG filming is that now that Carly is older, her adoptive parents want to keep her/her life private.

Catelynn went on to reveal to E! News that, “We are in the process of talking with her parents about having another visit if we can make it all work for everyone.” Contrary to her cautious optimism in this post, Catelynn’s Instagram puts off a different vibe.

I am saddened, but the news about Carly is true https://t.co/Yx5qgTssD5 pic.twitter.com/HBVI0mLWr4

On Twitter (@Catelynn Balterierra), she tweets, “I am saddened, but the news about Carly is true.” While scrolling through the Twitter feed, fan thoughts lean more towards the negative. Many saying that if the Balterierras really loved Carly, they would give up the show for more time with her. Another person tweeted that they (Tyler and Catelynn) should respect Theresa and Brandon’s wishes. Most hurtful (but maybe true) of all is that many people told Catelynn to stop using Carly as paid click-bait.