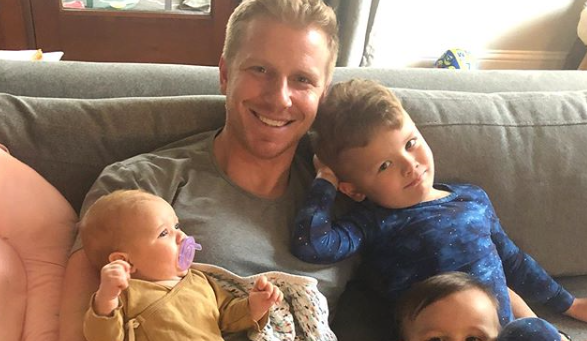 Sean Lowe stole everyone’s hearts as a runner-up on Emily Maynard’s season of The Bachelorette. Chris Harrison and ABC executive Robert Mills are asking Bachelor Nation what seasons they want to see with The Bachelorette delayed due to the Coronavirus. They want to bring them to Netflix for those fans having withdraw.

Sean Lowe went on to become The Bachelor, but he does not want his season to be streamed. Harrison asked, “If you could see prior seasons what would you want to see?”

Sean Lowe Had A Response To Chris Harrison’s Request

Sean Lowe had a request for the show runners. He said, “For the sake of my marriage, can I withdraw my season from consideration? I don’t need my wife seeing that. Thanks in advance.” Robert Mills joked that he would be the first one up.

In 2013 Sean Lowe found his forever with Catherine Giudici. The two are now married with three kids and he doesn’t want to relive it. One fan said, “too late a lot of us requested your season. Better buy Catherine something nice now.” Another fan tweeted, “Sean… your season was the best. I would like to re- live it all over again so I can take tips from Catherine on how to be cool, composed and drama-free.”

For the sake of my marriage, can I withdraw my season from consideration? I don’t need my wife seeing that. Thanks in advance. https://t.co/8e7mx42PJt

Sean Lowe may not want his season streamed, but other stars are tweeting their approval. Molly Mesnick has been reliving her controversial season pursuing The Bachelor, Jason Mesnick on Netflix. She tweeted, “Can’t wait for all these other Bachelor/Bachelorettes to feel the pain and embarrassment of reliving their season like Jason & I have w/ Netflix these past 4 months.

Mills also said maybe they would stream the shows and have a certain time Bachelor Nation could tweet together according to Yahoo Entertainment. “Nothing would be more fun than to rip on me knowing its over,” Nick Viall said obviously looking forward to laughing at himself. Chris Harrison really wanted to know what people wanted. He said, what do you want, “If you could see prior seasons what would you want to see? Clare’s season with Juan Pablo? Start at the beginning? Trista’s Bachelorette? Weigh in give us your thoughts.” No matter what, it looks like fans will have to settle for re-runs until the world figures out how to function again.

Hopefully, the news will come out soon about The Bachelorette and when they will start filming.

Fans Speculate: What Caused Todd Chrisley’s Scowl In THIS Photo?
‘General Hospital’ Recast Leak – Who Is Next In Port Charles?
Jedidiah Duggar & Katey Nakatsu Share Special Update & Cute Photos
Jenelle Evans Furious, Mom Barb Goes Behind Her Back, What Did She Do?
Derek Hough Reflects On His Long History With ‘Dancing With The Stars’