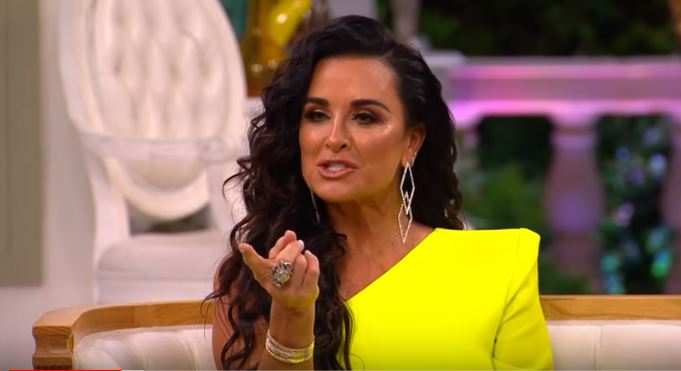 The rumors of The Real Housewives of Beverly Hills having a drama-free season were greatly exaggerated. While newbie Sutton Stracke does allege Teddi Mellencamp is “boring,” the other ladies ramp up the drama with arguments and affair allegations.

The trailer starts off with a screaming match between Kyle Richards and Dorit Kemsley. The cast gathers for an astrology reading. During the discussion, Kyle cuts Dorit off, causing her to yell, “Let me finish!”

Actress Garcelle Beauvais joined RHOBH for Season 10. In response to the argument, she says, “those are fighting words” before calling the drama “white people s–t” in a one-on-one interview.

Reality Blurb reports that Season 10 will see some relationship drama between Dorit and her husband, PK Kemsley.

As TV Shows Ace reported last week, Denise sent co-star Brandi Glanville a cease-and-desist letter during the course of filming. The legal maneuver was meant to stop Brandi from speaking out about their alleged affair. RHOBH co-star Lisa Rinna asked Denise point blank about the court order. Denise angrily responds by asking who told her that.

Throughout the trailer, Denise appears upset about someone trying to ‘destroy’ her family. Her husband, Aaron Phypers, gets involved in the drama with a confrontation with Erika Jayne. All of our questions will hopefully be answered during the course of the season.

The Pretty Little Mess author took on the role of Roxie Hart in the Broadway show Chicago. Erika follows a long line of performers in the iconic role, including Lisa Rinna. Sadly, Erika didn’t get to see her expected run all the way through.

As TV Shows Ace reported, NYC shuttered all Broadway shows until at least next month due to the coronavirus outbreak. Erika was originally scheduled to appear through March 29. Many of her RHOBH co-stars supported Erika by showing up during opening night. Denise Richards was notably absent.

RHOBH‘s Kyle Adds a New Addition to Her Brood

Teddi Mellencamp isn’t the only RHOBH star to add a new member to the family. Unlike Teddi, Kyle’s new addition has four paws and fur. That’s right. She got a puppy!

The new member of our family, Luna.

Season 10 of The Real Housewives of Beverly Hills premieres April 15 on Bravo. Tell us in the comments what you think of the action-packed trailer. Will you be watching without Lisa Vanderpump on the show?

BravoTV has an extended version of the trailer seen below.