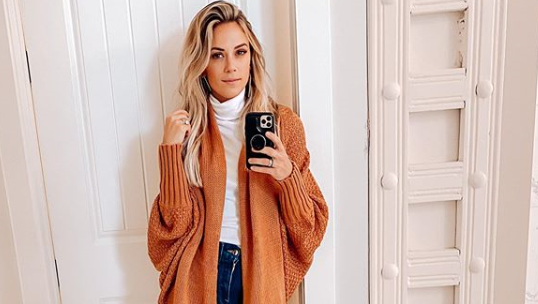 Everyone is anxious about the Coronavirus and especially those that must travel for work and be on the front lines. Jana Kramer of One Tree Hill is one of those people who has to travel for work.

She has a four-year-old daughter Jolie and a fifteen-month-old son Jace. She stated they were following the guidelines and quarantining in Canada, but she was very anxious.

What Made Jana Kramer So Nervous?

Jana Kramer shared that following the rules had made her completely a nervous wreck. She said, “I lay in bed last night literally having an anxiety attack. I woke up this morning choosing not to go straight to the news but instead do what I can.”

She said what she could do was stay in and protect her kids. They were washing their hands and playing together according to Us Weekly. She said, “fear is going to hurt more of us, or so my therapist says.”

She Caught Some Static For Traveling With Her Children

Jana Kramer posted on Friday she planned to go to Canada for work. She said the whole family was going and they’d be there for a month to film a movie. She said she knew people were staying in and she had to do her job. It was in her contract and production was still a go for the movie.

She addressed all the hate she was getting by saying, “I’m not just, like, going on vacation. Where I’m going, apparently, there’s no cases. I also know if I don’t show up, I could get sued.” Jana said she was taking it seriously and that the production company wouldn’t put her at risk. Fans were still not sure with the threat the Coronavirus posed. People were very vocal telling her she wouldn’t be able to get home. One woman said, “why risk your kids and husbands’ safety. You go and let them stay home.”

Well. Here we are. 2 days ago we flew to Canada. I can admit when I’m wrong and I feel like I should have listened, but I didn’t want to live in fear and I also trusted production that everything was better in Canada (it is as of now) so because production wasn’t shutting down we left as advised. As the hours literally kept passing there were new rules, precautions etc to follow so my concern grew larger. As of today we shot our first and only scene. The Prime Minister put more restrictions on and the production did the absolute right thing by shutting us down. It’s safer for ALL THOSE THAT CAN to be home, and hunker down so we can stop the spread and keep our families and friends and people next to us healthy. I also need to give a huge shout out to @saragretzky and her dad for getting my family this plane. I called Sara a few hours ago balling my eyes out as I didn’t want to travel with kids and all of us 48 hours later to airports again (ugh I’m still mad at myself about that and feel awful) and 4 hours later they came to get us. I love yalls hearts. Thank you for getting us HOME.

Today on her Instagram, Jana Kramer posted that she could admit when she was wrong. She stated she didn’t want to live in fear and everything was better in Canada. Now, production has shut the movie down and she only shot one scene. A friend came to get them in their plane so she didn’t have to take her kids in the airports again. Some people were supportive telling her she was a good mom and she couldn’t have predicted what was going to happen. Things change very rapidly with a nationwide emergency.