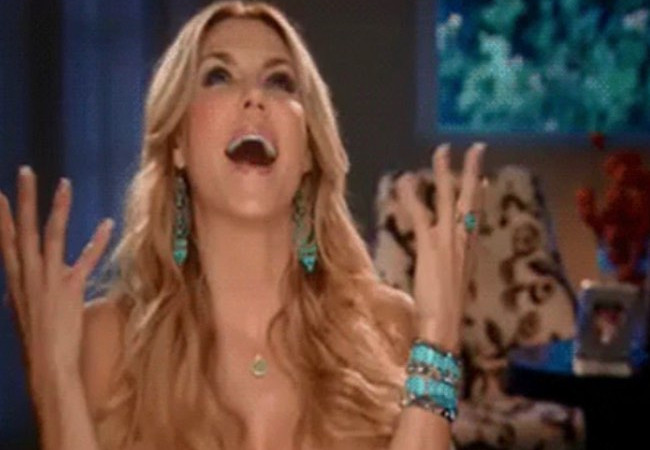 The coronavirus pandemic has Americans flocking to stores and markets to stock up on essentials in panic, even RHOBH and RHONY stars. The mass chaos is flooding social media with photos of bare shelves with toilet paper, hand soap and medicine aisles picked clean. The Real Housewives of Beverly Hills star Brandi Glanville was out of luck looking for toilet paper.

New York State, including NYC, and California lawmakers are shuttering restaurants, bars and other entertainment venues. Many states encourage residents to stay home for possibly the rest of the month.

Many of Bravo’s Real Housewives franchises, including RHOBH and RHONY, are affected by the crisis. Production has been halted on filming for the time being. How are Bravolebrities, who are used to being on the go, handling self-imposed isolation?

The Real Housewives of Beverly Hills star Brandi Glanville is a Twitter pro, regardless of coronavirus. The former model regularly interacts with her followers on social media. She also doesn’t shy away from hard topics, such as toilet paper shortage, People reports.

RHOBH‘s Brandi took to Twitter over the weekend to vent about having to go to five stores without finding any toilet paper. She revealed that her household was out of TP already. The RHOBH alum had some advice for her fellow citizens: “Stop hoarding.”

My household is officially out of toilet paper I’ve been to five markets and there is none:/ stop hoarding

During an Instagram Live with Andy Cohen, VPR’s Kristen Doute spilled a little tea. Apparently Kristen is quarantining with Brittany and Jax Taylor.

TV Shows Ace reported that her ex, Brian Carter, wasn’t there. In fact, Kristen revealed that she is dating someone new, but he is currently out of the country.

just over here, quarantined at Britt’s & reminiscing about simpler times…

Vanderpump Rules star Scheana Shay recently promised her followers an upcoming educational video on how to make her famous enchiladas.

Absolutely! It will be a version of my recipe bc I can’t get my normal ingredients… but this way, everyone can make “Scheana’s” famous enchiladas 😉 https://t.co/oZ21vQl0DN

But before she resorted to cooking lessons, Sheana posted an ill-advised invitation for her local friends to come hang out. Twitter was swift with calling the VPR star out for her ignorance, TV Shows Ace wrote.

What Are RHONY Stars Doing During the Outbreak?

The Real Housewives of New York’s fan favorite, Ramona Singer, divorced Mario Singer in 2015. The former couple remain close and rumors have persisted over a possible reunion. The rumors heated up after Instagram Live videos showed the RHONY star and her ex self-isolating with daughter Avery in NYC.

🚨RAMONA AND MARIO ARE SELF ISOLATING TOGETHER 🚨#RHONY

The streets of NYC are deserted as residents are advised to stay inside. RHONY star Sonja Morgan ignored that advice and shared a selfie while walking around the city. Followers were quick to point out that her advice to get fresh air was the opposite of what the CDC advises.

To my fellow New Yorkers today is a bright sunny fresh day to get out for a brisk walk. Get some fresh air and sunshine. Nothing like some vitamin D to lift your spirits 👍🏻 Governor Coumo gave a very unifying and sensible talk today about not panicking and staying practical so we can care for those elderly and with underlying medical conditions that render them more susceptible and therefore in dire need of hospital access and care. 🤜🏻🤛🏻 #unite and don’t #fight #governorcuomo #corona #newyorkers #nyc #march15 #prayerday #loveyourneighbor #rhony girl 👧 #mom

While her Real Housewives co-stars are taking selfies and dancing, Bethenny Frankel is taking action. CBS News reports that the former RHONY star has raised over $60,000 to provide lunches to school-age children in NYC and other areas.

In addition, she has created “coronavirus kits” of masks, hand sanitizers and other essentials to pass out. So far, 20,000 kits are ready.

The Real Housewives of Orange County’s Braunwyn Windham-Burke has seven children to occupy while schools around the country are closed until mid-April and possibly longer. Over the weekend, Braunwyn shared a video featuring two of her older children, Jacob and Rowan.

During the video, the RHOC star talked to the teens about mental health and how to deal with general anxiety made worse by the coronavirus fears. It seems like only some of RHOC, RHONY, and RHOBH stars are anxious about the situation.

Discussing anxiety around Covid-19 with Rowan and Jacob, I hope this discussion helps a lot of you feel less alone🌸#coffeeclutch @rowanwindhamburke @jacobwindhamburke

RHOBH’s Lisa Rinna is Ready With Quarantinini and Dance-Offs

RHOBH star Lisa Rinna always finds a reason to let loose and dance. Even in the middle of a coronavirus pandemic. The former soap star shared a video of herself holding a drink with the caption, “It’s Quarantini Time.”

WE HAD A LIVE DANCE PARTY @bradgoreski @garyjanetti AND I!!!!!!! 🙌🏼 #DANCE ❤️🧡💛💚💙 #TreatPeopleWithKindness @harrystyles #BRAD #GARY

However TV Shows Ace readers choose to spend the next few weeks, stay safe and wash your hands.

Filming for RHOBH is on hold. RHONY returns to Bravo April 2.