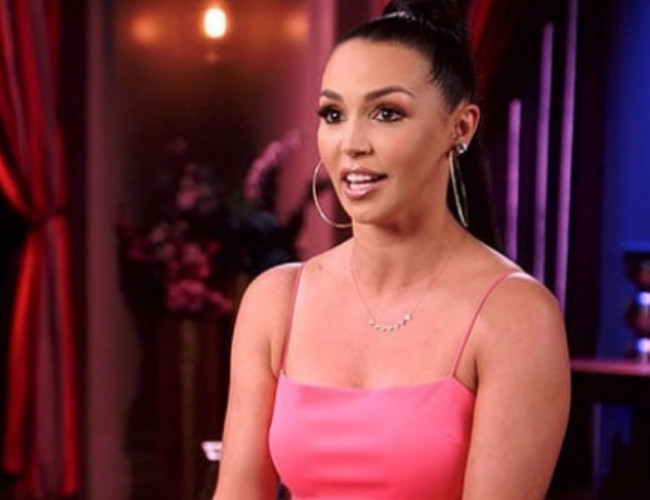 Vanderpump Rules star Scheana Shay is sick and tired of the way the Bravo show chooses to portray her. One of the original VPR cast members, Scheana’s dating life has always been the main focus of what fans see of her on-screen.

If she’s not pining over a boy, she’s shown working at SUR. Scheana got herself in a little hot water with fans this weekend over her comments about quarantines amid coronavirus fears.

Scheana Says She Looks Worse ‘Every Year’ on Vanderpump Rules

In a wide-ranging interview with Entertainment Tonight, Scheana spilled the tea on all things Vanderpump Rules, even SUR boss Lisa Vanderpump. But first, the SURver vented about how the show portrays her as “boy crazy.”

At the start of Season 8, VPR newbie Max Boyens shaded Scheana as “boy crazy” after the two briefly dated. For much of Season 6, viewers and co-stars were bombarded with talk about her then-boyfriend, Rob Valletta. Did you know Rob can hang a TV in under 7 seconds? Vanderpump Rules fans know.

Despite what we see on-screen, Scheana insists there’s more to her than her dating life. Speaking about how she’s edited on the show, she said,

“I mean, it just gets worse every year. It’s just, like, every season, it’s a different style SUR dress and a different boy I’m awkwardly flirting with.”

TV Shows Ace reported earlier this month that Scheana and co-star Ariana Madix find it frustrating that their lives outside of SUR aren’t shown. Scheana opened up to ET about again wishing other aspects of her life were shown.

“I would love to be on stage in Vegas, in my podcast studio… with my boyfriend.”

Earlier in Season 8, Lisa Vanderpump confronted Scheana for treating newcomer Dayna Kathan poorly. The SUR boss asked Scheana directly if she was jealous of Dayna because she was dating Max.

Scheana denied being jealous, but made amends with Dayna. However, she tells ET that she doesn’t love it when Lisa Vanderpump inserts herself in situations. She says,

“With Lisa, I love her so much and I love her advice and all of those moments I get with her, but she has this way of telling me how I feel and what I want, and that drives me insane.”

This is something Scheana may bring up at the Vanderpump Rules reunion when it films in a few months.

Scheana’s boyfriend, Brock Davies, is based in San Diego.

While the couple have only been dating for six months, Scheana is already considering their future. Scheana reveals that she is renewing her lease in the L.A. area for at least another year.

After that, she might consider moving to San Diego. But doing so would likely mean leaving SUR and VPR behind.

Scheana is also looking toward having children in the future. She has been open about her fertility struggle. The SURver has already undergone two procedures to retrieve and freeze her eggs. Another procedure is on the horizon. She says freezing her eggs is her only hope at having children.

“But, I’m not gonna get pregnant on my own, it’s just not in the cards for me, unless there was a miracle.”

During her interview with ET, Scheana dropped a bombshell. One of her VPR co-stars is undergoing the egg retrieval procedure at the same time. However, Scheana is keeping the ‘who’ a secret for now.

Vanderpump Rules airs Tuesdays on Bravo. Check back with TV Shows Ace for any updates on which co-star plans to freeze her eggs. Tell us your guesses in the comments.