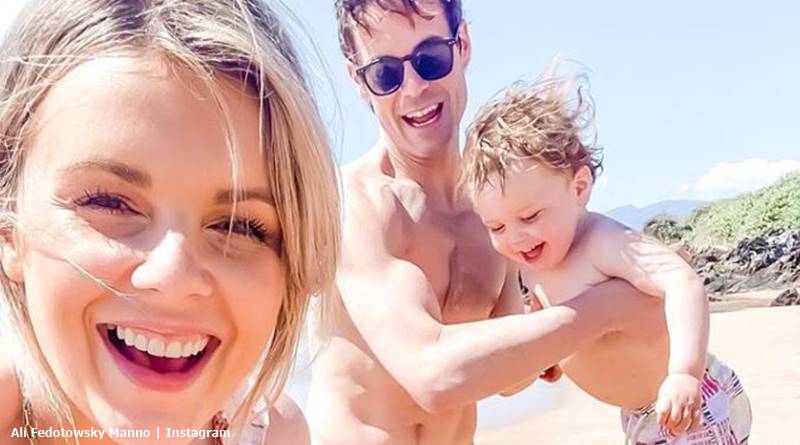 The Bachelorette alum Ali Fedotowsky-Manno has been featured in the news a bit lately. Fans recall she also featured on The Bachelor. So, she’s got loads of insider views on the way Peter Weber’s season ended. Actually, after commenting on Peter, she later said she’d support her kids if they chose to be on the franchise. Now, she talked about how her skin cancer diagnosis makes her super-careful.

Taking to her Instagram, to share about her partnership with Each & Every natural deodorant, she mentioned her skin cancer. It came in the same post where she gave Peter Weber some advice. TV Shows Ace reported that she said, “my advice to Peter tonight, don’t sweat it my friend. Everything will work out just the way it is supposed to be.”  She also talked about her kids and how she’d back them if they wanted in on the show.

Ali noted her time on The Bachelorette and The Bachelor gave her many opportunities. She talked more about her kids and her scare with skin cancer. On her Instagram, she mentioned, “All of these things are more important to me than ever since having kids and after my skin cancer removal.” She referred to non-synthetic fragrances at the time. People followed up and she opened up a bit more about it.

Can you imagine how different my life would be if I had ended up with the person I chose on the Bachelorette?! It’s surreal to think about. I wouldn’t have these two munchkins in my life (or my amazing husband) who are my entire world! So my advice to Peter tonight, don’t sweat it my friend. Everything will work out just the way it is supposed to be. Because there’s no doubt in my mind that I was supposed to be Molly and Riley‘s mom (and Kevin’s wife!) . And speaking of not sweating (see what I did there? Ha!!!) @EachandEveryCompany gave me the code LOVE for 40% off their UH-MAZING natural deodorant that is only good for the next 24 hours in honor of tonight‘s Bachelor finale! (Code drops to 30% after that). Maybe I should’ve sent Peter some? Ha! Because we all know he’s going to need it tonight. But in all seriousness, I’ve used nothing but @eachandeverycompany deodorant for the last six months and it’s the best of the best. It’s natural, paraben-free, no synthetic dyes or fragrances, and it doesn’t irritate my skin. All of these things are more important to me than ever since having kids and after my skin cancer removal. And quite frankly, it works! I know so many of you have gotten it since the last time I posted about it and tell me how much you love it. So I am so psyched that we have this amazing deal right now! Stock up before the code drops to 30%! Swipe up link is in my stories! And what do you guys think is going to happen with Peter tonight? I’m so excited to see (and nervous – but not sweating it. Ha!)! #eachandeverypartner #dontsweatit #thebachelorfinale #thebachelor #motherhood #ParabenFree #EmbraceSweat #NaturalDeodorant

Ali opens up about her skin cancer

People spoke to Ali about her skin cancer. They noted that “her life… “changed a lot” since her diagnosis with “basal cell carcinoma earlier this year.” In fact, she doesn’t just take care of her own skin. Fans know Ali’s got two kids by her husband, Kevin Manno. Little Riley’s only one-year-old now and big sister Molly turned three.  She told the outlet, “I’m like super protective over my kids now. I mean, I always was with my kids, but now I’m even more so than I was before.'”

As The Bachelorette alum noted, hearing you got skin cancer really makes for a “scary” moment. After all, it’s very likely that “Once you have one basal cell, you’re likely to have more.” As basal cancer’s common, she advised people to just go and get checked out. And, kids are also vulnerable, so no wonder she’s very careful with them as well.

Do you agree that Ali Fedotowsky-Manno’s totally right in staying vigilant and super-careful since her skin cancer diagnosis? Sound off your experiences in the comments below.