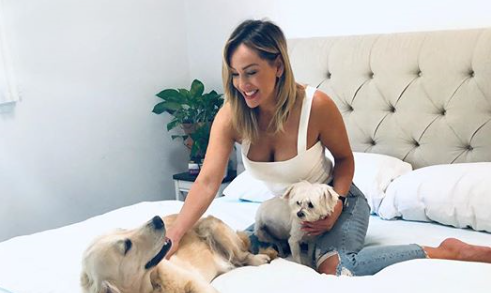 In her history with Bachelor Nation Clare Crawley has never been one to take anyone’s crap. On Juan Pablo Galavis’s season in 2014 she told the lead just what she thought of him. After she was his runner-up, Galavis shamed her for their late night hookup according to US Weekly, she told him she would never want, “someone like him to be the father of her children.”

After that Clare became a fan favorite. Now it seems her thirty-eight-year-old ex is still paying attention to what she does. He made a point to tweet about her being the new Bachelorette and Crawley wasn’t having it.

What Did Juan Pablo Say About Clare Crawley’s Season?

Juan  Pablo posted on his Twitter account, “I just saw the guys for Clare Crawley’s season. It’s going to be interesting seeing her get hit on by kids in their 20s.” He tagged the new Bachelorette in the post and said it would be the third season he would watch.

We all have our ups and downs and things in our lives that can weigh heavy on us. No one is exempt from this. But I hope you all have something in the midst of that -no matter what- large or small, that makes your soul catch fire and radiate out of your chest like sunbeams. So strong that others can’t help but feel it! Hold onto that. ❤️

A fan called him out saying they knew he’d have a, “jealous petty response.” Juan replied he just saw it as fascinating. Clare made a point to respond as well saying, “And yet here you are, older than 99% of them and still can’t practice compassion and kindness.”

Did Juan Pablo Stick By His Comments?

Juan Pablo didn’t keep the comments negative. He went on to say she was taking it the wrong way. He wants her to find love. Juan Pablo told her “in this season unfortunately you will say goodbye to many, in the end it will be 2 and you will stay with one.”

He says she’ll understand so much more and he doesn’t get the hate after six years. In the meantime Chris Harrison applauded her response to Juan saying, “this is why she’s our Bachelorette. She’s playing chess while the rest play checkers.” Clare has addressed her age before saying she thinks it gives her more experience and will make her the best candidate for the lead.

Hopefully this will be the chance for Clare Crawley to finally find her true love. She shamed Juan Pablo on national television and found love again after Bachelor Winter Games with Benoit Beausejour-Savard. It didn’t work out for them either. Now she has a fresh chance to find Mr. Right while the world watches. She will have her chance after her season resumes filming following delays from the Coronavirus.