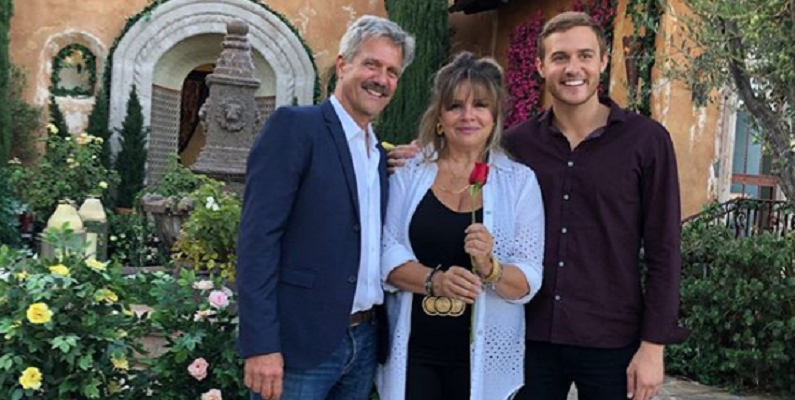 Bachelor contestant Victoria Fuller used to be the most polarizing person of this season. But now that award goes to Peter Weber’s mother, Barbara Weber. She made a huge splash on After the Final Rose live episode.

Barbara made it clear that she did not approve of Peter’s relationship with Madison Prewett. Even the rest of Peter’s family didn’t like hearing about their reunion. Bachelor Nation thinks she had something to do with their sudden split. Despite the drama, Peter is not having issues with his mom. He believes that she was the star of The Bachelor, and that she should have her own reality show.

The Bachelor Peter Weber thinks his mom is made for TV

TMZ caught up with Peter Weber following his not-so-shocking split from Madison Prewett. Just because he didn’t take his mom’s dating advice doesn’t mean he has any hard feelings about her. In fact, Peter was all smiles during his latest sighting. The Bachelor wore a purple T-shirt as he chatted with TMZ’s photographers.

Being the Bachelor has been the most incredible experience of my life. I have grown in ways that I didn’t even know possible. The two most beautiful things that happened to me throughout this journey have been @hannahann and @madiprew coming into my life and showing me love like I will never forget. No matter how this thing ends I will be forever grateful for you both and this once in a lifetime journey ❤️ #thebachelor #ntaustralia #redcentrent

Barbara was called the “villain” of the entire Bachelor season. She infamously told Madison that she was never going to approve of her and Peter’s relationship. Barbara continued to throw shade at the couple on social media after they announced their breakup on Thursday. She posted a video of herself dancing along to “Leaving on a Jet Plane.” This led to the rumors that she could appear on the new season of Dancing with the Stars.

Could Barbara end up on Dancing with the Stars?

As per Newsweek, this may not be the last of Barbara Weber just yet. She could return to reality TV after becoming one of The Bachelor’s most-popular villains. She’s currently in talks with ABC about appearing on Dancing with the Stars, according to ABC’s reality chief Robert Mills. The ABC executive producer told The Hollywood Reporter that he would love to have Barbara on the dance competition show.

“I’ve also seen a lot of people asking if she’d be on Dancing with the Stars,” he said. “If Barb is interested in something, we’d always sit down with her. And she’s local!”

While Barbara could appear on another ABC series, it’s yet to be known. Robert also hinted that The Bachelor would like to release a follow-up episode on Peter and Madison’s relationship, but only if both parties are ready and willing. The couple weren’t originally contractually obligated to do anything after The Bachelor since ABC felt that their relationship was too new. It was also too new for Peter and Madison since they split two days later.

What are your thoughts? Do you think Barbara Weber would be perfect for reality TV? Sound off below in the comments section.