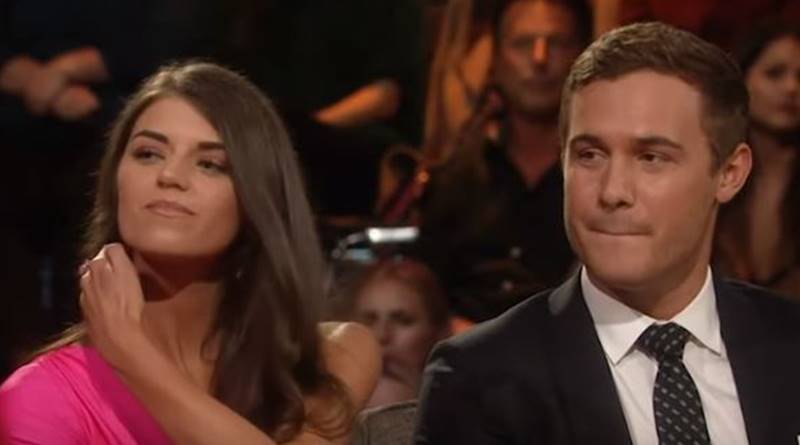 The Bachelor ended with Peter Weber breaking it off with Hannah Ann Sluss and choosing Madison. Recall, she dumped him in Australia. In the final show, the producers brought Madison out and, clearly, it shocked Peter’s mom. Asked about Madison, after a very long pause, Peter admitted he still loved her. Well, many fans wondered if they were onto the real deal. And it never lasted. They split already, as TV Shows Ace reported Thursday evening. And, it looks like their problems were brewing when they were spotted out on a lunch date.

Besides the drama created by Peter’s mom at the finale, TV Shows Ace reported that it all seemed very inconclusive. In fact, they skipped the usual press rounds after the show. That’s why they never featured on Good Morning America and Jimmy Kimmel Live. Even the producers apparently left them to navigate their way for a while before they checked back on the relationship.

Fans know that if The Bachelor couple stayed together, Madison had a lot stacked against her. Peter’s mom’s unapologetic about her feelings for Madison. Simply put, she feels Madison’s got very few redeeming characteristics. Any relationship where the family doesn’t accept the partner could end up in disaster. Plus, at the back of Peter’s mind, the recollection that she dumped him could have left a bit of a raw feeling.

Nick Viall said to US Weekly, “Let’s be honest, the odds are stacked against them so I don’t know.” And, it seemed they realized that pretty quickly. A source told the outlet that they spotted the couple out for lunch. They went to a restaurant in the “Studio City area of L.A. on Thursday, March 12.” The witness noted they seemed rather “intense.” They felt that the body-language indicated problems.

Specifically, “Madison had both hands on her temples for multiple minutes.”‘ According to the Bodylanguage.com site, this might indicate someone under stress. The witness also noted that Madison did “most of the talking.” Meanwhile, Peter did a lot of nodding and furrowing his eyebrows.” Well, not long after that, we noted that Madison announced that The Bachelor couple already split.

On her Instagram, Madison announced, “As Peter and I have decided to go our separate ways, I am confident that we will both move in the direction of our purpose and never forget that God has a plan in all things.” While it’s rather sad, many fans agree that perhaps Peter The Bachelor just wasn’t ready to commit. Maybe he needs a timeout to think about what he really wants.

What do you think about the twist that left Peter with nobody? Hannah Ann’s furious, Kelley Flanagan said he needs time to decide what he wants, and it looks like Hannah Brown outgrew him. It looks like someone may have even witnessed their breakup being discussed on the lunch date. Sound off your thoughts in the comments below.