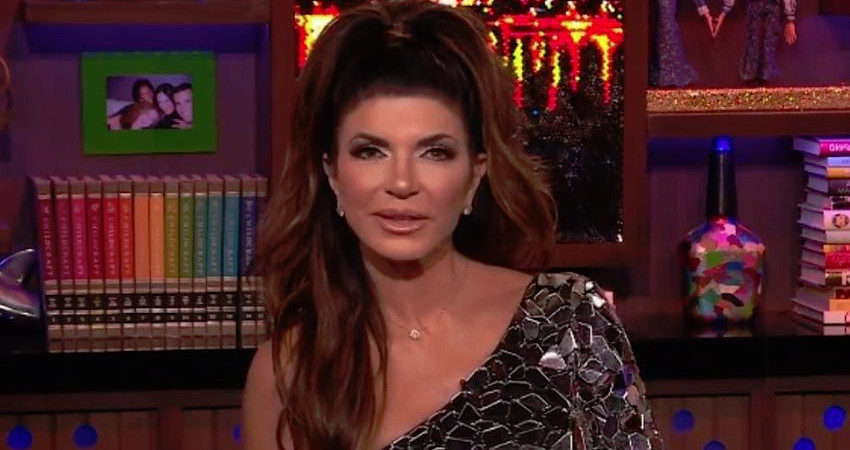 Is there plans for a man in Teresa Giudice’s future?

What’s a The Real Housewives of New Jersey reunion without surprising revelations? During the second part of the Season 10 reunion, Teresa Giudice opened up about her future as a single woman. More specifically, she dished on what type of man she sees herself with.

As fans know, Teresa split from her husband of 20 years, Joe Giudice, in late 2019. While the former couple still co-parent their four children, they are no longer in a relationship. That became clear on the season finale when Teresa refused to sleep with Joe, as TV Shows Ace wrote.

During the reunion, Teresa looked ahead to what might be in her future. Including another child, a baby boy.

They have my heart today & everyday! Hope everyone enjoys the day! 😘 #happy valentinesday2020 ❤️

Teresa Giudice already has four daughters with her estranged husband. She revealed a few months ago that she once tried IVF to have a boy. This was before she got pregnant naturally with her youngest daughter, TV Shows Ace reports.

She hasn’t ruled out trying IVF again if she ever meets another man she’d want to have children with. She said at the reunion that she would “love” to have a son. At 47, though, there’s only one way she could have another child. Teresa said, “I might freeze my eggs, you never know!”

Melissa Gorga has three children with Joe Gorga, Teresa’s brother. When she turned 40 last March, Melissa had something of a midlife crisis. She began to consider the idea of having another child. Her back-and-forth on the huge life decision dominated much of Season 10.

The On Display singer ultimately decided her child-bearing days are over. Co-star Jennifer Aydin accused Melissa of “faking” the IVF storyline, citing Melissa’s growing fashion career and being too “self-absorbed” to raise another baby.

One fan agreed with Jennifer and started a petition a few weeks ago to have Melissa kicked off the show, TV Shows Ace reported.

What Kind of Man is RHONJ’s Teresa Giudice Looking For?

Before she can consider freezing her eggs to have a baby boy, Teresa needs to find herself a new man. Unfortunately for fans rooting for it, her new man isn’t the pool guy. She shut those rumors down at the reunion by saying Anthony Delorenzo is just a “dear friend.”

Besides, Teresa Giudice is done with tough Italian guys. She says,

My first guy was Italian, I want my next one to be Jewish. I heard Jewish men make the best husbands.”

Things got a bit tense at the reunion when Teresa Giudice refused to admit that her estranged husband wasn’t nice to her off-camera, as she contends. Teresa shot daggers at her sister-in-law for saying that Joe Giudice spoke to Teresa harshly regardless of whether cameras were around, People reports.

Teresa Giudice did admit that she never laughed much around Joe, something she wants with her next man. She knows exactly what kind of qualities she’s looking for in her future partner. She says,

I want someone to talk so sweet to me and be gentle. I want to be beautiful to him. I’m just so done with the whole Italian tough guy. I’m tired of that, I want something different.”

During the RHONJ reunion, Teresa admitted that neither she nor Joe have moved forward with the divorce proceedings.

The Real Housewives of New Jersey reunion part 3 airs March 18 on Bravo. TV Shows Ace reports that Season 11 prep has already begun. Stick with us and we’ll keep you posted if a new man finds his way into Teresa Giudice’s life any time soon!