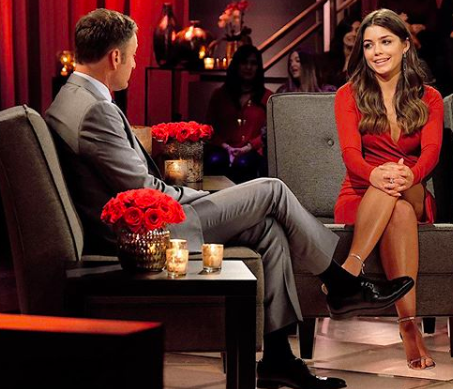 If you found yourself having a moment of panic during The Bachelor finale proposal between Peter Weber and Hannah Ann Sluss, do not worry. You are not alone!

Peter found himself struggling with a major case of indecision in the days leading up to the final rose proposal. However, he ended up popping the question to Hannah Ann. Hooray, go Hannah Ann! Let’s be real, she’s been a real winner since day one.

But it seems Peter may have just been settling (in his mind) after his runner-up, Madison, chose to leave him in the Australian dust just two days before the proposal. At the time, Madison could not bring herself to be with Peter due to her personal values and left before Peter’s final decision.

Anyway, back to the proposal. So, as Peter began his big speech to his soon-to-be fiancée, he took a long pause. It appears he was just trying to gather his thoughts to explain how things played out between himself and the final two ladies. However, this pause just so happened to take place after he said, “So, Madison…” INSERT PAUSE.

Entertainment Tonight reported that this very noticeable pause left a LOT of people thinking he had actually called Hannah Ann by the wrong name. Just like when Ross Geller from Friends called Emily by Rachel during their wedding ceremony.

Fans are so relieved to know they weren’t alone in being on the edge of their seats, waiting for Hannah Ann’s reaction to being called Madison in the middle of her first-ever proposal! Fans remind Peter to choose his words more wisely.

For a hot second, I thought Ross Geller was off the hook. #TheBachelor https://t.co/CmF7z2d3Ag

DID ANYONE ELSE THINK HE WAS HAVING A ROSS GELLAR MOMENT AND SAID MADISON INSTEAD OF HANNAH ANN ?! @BachelorABC pic.twitter.com/oJEeja5UM2

For a quick second, I thought Peter pulled a Ross Geller which would track actually.#TheBachelor pic.twitter.com/o0eGjLGAuQ

Telling my kids this is Ross Geller #TheBachelor pic.twitter.com/CPHfEyVGAX

The above includes just a few of the amazing Tweets poking fun at this year’s Bachelor pulling a Ross during the proposal. The Tweets just keep on going, and yet somehow they just don’t seem to get old.

Why Did Madison Leave?

Peter shared with Entertainment Tonight last month that he didn’t consider Madison’s warning to be an ultimatum. “Trust me, it made it an insanely incredibly difficult week for me. There’s no doubt about that,” Peter said. “But I can’t fault her for sharing her heart.”

That’s reassuring to hear Peter be so kind to Madison, despite many fans and the remaining contestants not seeing her words quite the same way.

Be sure to check in daily with TV Shows Ace for more coverage of all the latest Bachelor news!

’90 Day Bares All:’ Who Took Colt’s Mom Debbie On A One-Night Stand?
Lifetime’s ‘Dying To Be A Cheerleader’ Is Cautionary Tale
‘Cobra Kai’ Spoilers: Johnny & Daniel Will Be ‘Unstoppable’ In Season 4
‘Life Below Zero: Next Generation’ Exclusive: Alex Javor’s Nail Biting Roof Repair In Ice
Scott Disick Spotted With Kids And New Girlfriend