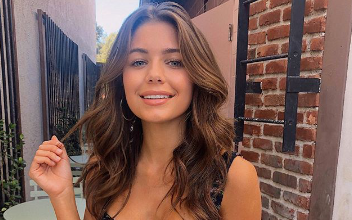 Hannah Ann Sluss stood up for herself when it came to the way Peter Weber handled their engagement. It seems she took some notes from another Bachelor Nation favorite, Melissa Rycroft. Rycroft said after she watched The Bachelor someone sent her a message and told her to watch her After The Final Rose. She said she’d never seen the whole thing.

When seeing herself back then, she said, “it hit me! Made me sad for that little girl sitting on that stage. I almost don’t even remember her – it feels like a lifetime ago.” Rycroft was referring to what happened when Jason Mesnick broke up with her to pursue his runner-up Molly Malaney. He’d already gotten engaged to Rycroft.

After seeing Hannah Ann Sluss and Peter end up together, fans watched them break up. Peter told Hannah he couldn’t give her his whole heart much to his scowling mother’s displeasure in the audience. Hannah not only told him then what she thought, but she was able to get a final word in at the after show as well.

Hannah Ann Sluss confronted Peter and stood up for herself saying, “You took the most precious moment that I could ever imagine away from me. Because you selfishly just didn’t want me to walk away or to send me home.” She gave him back his ring and left. Melissa said something similar to Jason when he broke up with her. She said, “To me, getting engaged and finding that person was a once in lifetime thing and you took that from me. You took it.” Melissa told him she wished he would have let her go.

The Episode Is On Netflix Right Now

Hannah Ann Sluss posted to Melissa on Instagram. She commented, “my inspiration, you are a forever role model.” Melissa says it’s not always great to reflect on her past. She had the nineties poof and was wearing tank tops with scarves according to US Weekly. The Dallas Cowboy’s cheerleader said, “it was a mess.”

Melissa Rycroft says she gets messages all the time about her time on the show. She said it’s been eleven years and she didn’t watch it the first time. Rycroft said, “however, of course, I’m getting sent screenshots, and memes, and stuff that people are now watching and finding. Melissa married Tye Strickland and the two have three kids. She’s moved past her time on the show.