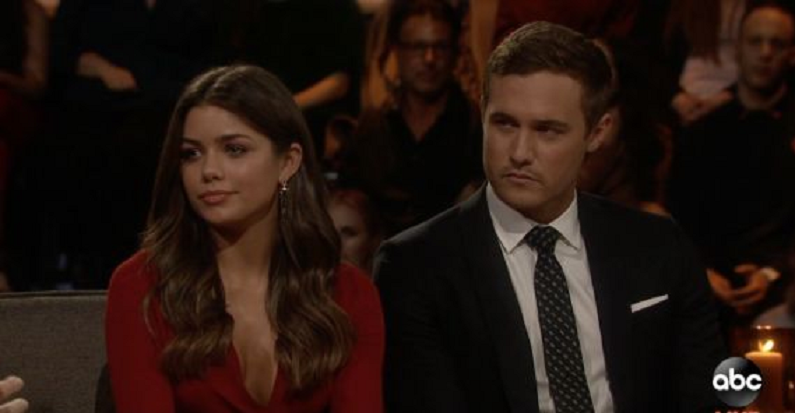 Hannah Ann Sluss said “yes” to Peter Weber’s proposal even though he still had feelings for Madison Prewett. Clearly, his heart wasn’t 100% there. Peter finally divulged his true feelings to Hannah Ann, and she scolded him in front of everyone. Unsurprisingly, the couple ended their engagement. Hannah Ann also had something to say about Hannah Brown, which left Bachelor Nation shook.

Hannah Ann’s appearance on After The Final Rose was her and Peter’s first time speaking to each other since ending their engagement. During Tuesday night’s final episode of The Bachelor, she dropped several truth bombs. That’s when she revealed there was another woman aside from Madison that Peter thought about while he was engaged to Hannah Ann. She was talking about Hannah Brown, the former Bachelorette who chose Peter as her final three and even appeared on the season premiere of The Bachelor.

Hannah Ann Sluss had this to say about Hannah Brown

As per Yahoo! Lifestyle, Hannah Ann Sluss revealed Peter’s true feelings during ATFR. She claimed that Peter was still thinking about Hannah Brown during their engagement. He needed to find “closure” with Hannah B. while he and Hannah Ann were still engaged.

“Peter, we’ve been through a lot together, and I should have really picked up on the first red flag that you gave to me was when you wanted to reach out to Hannah Brown to find closure with her,” Hannah Ann revealed on ATFR. “So really, looking back on it, our engagement involved three women: me, you still being love with Madison and proposing to me, and you need closure with Hannah Brown. That’s three women involved in our engagement that I was completely blindsided to.”

Bachelor Nation went into a tailspin on social media. Some were dumbstruck over Hannah Ann’s confession while others had a good laugh over it. Most of them took to Twitter to exclaim their feelings over her shocking reveal.

Hannah Ann: “My first red flag after our engagement was you reaching out Hannah Brown to find closure.”

Bachelor nation finding out HE STILL WASNT OVER HANNAH B #TheBachelor pic.twitter.com/O9A1eMIofr

DID HANNAH ANN JUST SAY PETER REACHED OUT TO….HANNAH BROWN FOR CLOSURE?! TELL ME BACHELOR NATION WE HEARD THAT RIGHT. CLUTCH THEM PEARLS. IT’S GO TIME. THIS SHOW. THIS IS A GOLDMINE. #TheBachelor pic.twitter.com/OQSjPyjV7f

So are we gonna just pretend like Hannah Ann didn’t just say Peter needed closure from Hannah B at the start of their engagement… bro…. why tf did you agree to be the bachelor 🥴 #TheBachelor pic.twitter.com/HCqR2S3juA

Hannah Brown has yet to respond to Hannah Ann’s thoughts. However, she did like a Bachelor fan’s Instagram post that included Hannah Ann’s quote about Peter needing to become a “real man” if he wants a serious relationship. It’s clear that she’s not happy with him either.

Hannah Ann has already moved on. She posted a photo of herself in pilot gear on Tuesday night (March 10) with the caption: “Flyin’ solo…no turbulence accepted. PERIOD.” It was her last chance to throw some shade at Peter. It’s safe to say that Peter’s season of The Bachelor was turbulent at best.

Bachelor Nation wanted Hannah Ann to become the next Bachelorette

Most fans think that Hannah Ann deserves a second chance at love. As Inquisitr reported, Bachelor fans feel that producers should have chosen her over Clare Crawley. Most fans were shocked to find out that the 38-year-old hair stylist was the new Bachelorette.

Roses are Red, Violets are Blue, Will I be spending forever with you?

Hannah Ann was one of Peter’s final two women. It was first revealed on Monday night’s finale episode that the couple would become engaged. Hannah Ann was ready for a new life with Peter and accepted his proposal.

However, Peter ended their engagement due to his feelings for Madison. Given the way Peter treated Hannah Ann, some fans feel that she deserves another shot at love.

What are your thoughts on what Hannah Ann Sluss said about Hannah Brown? Sound off below in the comments section.