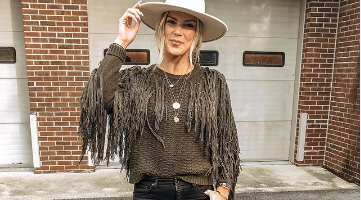 Merissa Pence isn’t content on just going away after her appearance on The Bachelor. During The Women Tell All Victoria Fuller said she didn’t understand why Merissa said those things about her. She said she just thought maybe Pence wanted to come on the show. Victoria Fuller adapted her usual ditzy persona when Chris Harrison asked her. She pretended she didn’t know why anyone wouldn’t like her.

Merissa said, “It definitely was hurtful to watch her on Women Tell All. It was her way of being manipulative and saying she didn’t break up multiple relationships.” Pence went on to say if Fuller had made a blanket statement, it would have benefited her. She looked guilty because she didn’t address it why Pence had been there.

Merissa Pence isn’t backing down from her comments about Victoria being bad news for Peter. She said the first time she met Victoria she told her she’d slash her tires over a guy. She said she would approach Peter again if she could do it over again. According to US Weekly she said the women whose lives were ruined by Victoria have thanked her for what she did by speaking out for them.

Both fans of the show and women who’d been hurt by Victoria Fuller have shown her a lot of support. Merissa said, “it wasn’t a personal motive for me to go on, it was a blanket motive for all those people here that couldn’t speak up.” She said people are coming to her now saying it was hard to see Victoria lie. Pence said, “it’s apparent that I’m opening it up for other people to speak about it because I made my initial statement.”

Merissa Pence continued saying she spoke for the people Fuller hurt. She said, if you have a kid and you’re divorced now you have to relive that while watching the show. Seeing Victoria on reality television just because she wants to be Instagram famous digs up dark times. She said she’s still glad told Peter the truth about her and she wouldn’t change it.

Pence said Victoria denying she broke up marriages was just her being manipulative. There were several fans who felt that’s what Victoria was all about through the whole season. As for the women that Victoria hurt, Pence said, “they want to say something but then they realize there’s more to life than this reality show.”

Has Hannah Ferrier Really Moved On From ‘Below Deck Med’?
Wait, Why Was Jeremy Vuolo Silenced On TikTok?
Adam Busby Gets Crash Course In Water Safety: Are The Quints OK?!
Did Ariana Madix Change Her Stance On Having Kids?
Amy Roloff Gets MUSHY As Her Wedding Countdown Begins