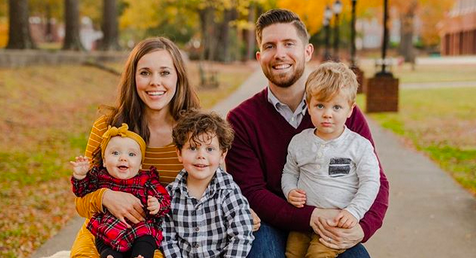 Jessa Seewald is an extremely generous member of the Duggar family when it comes to social media updates. She is always willing to dish out info on her children, her husband, and even her home life. So, it isn’t too hard to check into her social media profiles to see what the Seewald family is currently up to.

Lately, her followers have become particularly obsessed with the adorable videos and photos of her daughter Ivy. Some Duggar fans, however, did recently notice something a little strange in an Instagram video of Ivy. Fans suspected Jessa Seewald might be dressing her baby girl up in her brother’s hand-me-downs. Anyone who follows the Duggar family knows, this is an extremely controversial move on her part.

Why is dressing Ivy Seewald in boy’s clothing so controversial?

Jim Bob and Michelle Duggar prided themselves on their strict dress code. When the Duggar family found their way into the spotlight, the family dress code certainly got people talking. For starters, girls were only allowed to wear long skirts. They had to be below the knee. Their tops also needed to cover both their shoulders and their chests.

“We avoid low-cut, cleavage-showing, gaping, or bare-shouldered tops; and when needed, we wear an undershirt. We try to make it a habit to always cover the top of our shirt with our hand when we bend over. We don’t want to play the peekaboo game with our neckline.” Duggar daughters explained in Growing Up Duggar.

She’s been over the headbands since she learned how to pull them off her head a few months back, but I’m excited she finally has enough hair to clip in a little bow. 🎀 So far, undetected. 😎

As Cheat Sheet reminds us, many of the Duggar children are married with children of their own now. So, they are breaking and bending the rules they grew up with. For example, we’ve seen both Jill and Jinger rocking stylish pants. Jessa, for the most part, still sports a pretty modest style. She also seems to prefer wearing skirts.

Jessa Seewald’s controversial decision is likely something she learned as a child.

Unsurprisingly, 19 children gets to be expensive. Michelle and Jim Bob were always open about how tight their budget was. Michelle and Jim Bob Duggar cut corners all the time to save money. Fans now suspect Jessa Seewald’s controversial decision to dress her daugher Ivy in boy’s clothing was likely for the same reason. Was cash tight for her and Ben? Was she trying to save some money?

As Cheat Sheet reminds us, Jessa Seewald previously confirmed her children do not have a lot of clothing.

“Most of my kids’ clothing comes from kids’ consignment sales, something like Rhea Lana’s. I will make a checklist ahead of time of everything I need and then when I go I try to stick to that list,” she explained on Instagram.

Duggars passing hand-me-downs around the family is pretty common. Fans will see the same dress on multiple Duggar babies across multiple families. They, however, recently noticed Ivy was rocking some of her brother’s clothing as well.

“Honestly surprised Blessa dresses Ivy in her brother’s hand-me-downs (and no bow!),” a Reddit user penned regarding a video of Ivy playing with a toy doll.

It’s the cutest thing in the world to hear her say “Baby!” . I’d say she’s pretty excited to finally have her own doll! #9monthsold

Another Reddit user added: “I’m not willing to give Jessa too much credit for dressing Ivy in her older brothers’ clothes, when the reason may well be that she and [Ben] don’t have (or apparently want) jobs.”

“I’m curious if Jessa will let Ivy wear pants as she gets older.” A third chimed in.

Fans will have to keep following Jessa on social media to see how she dresses Ivy as she grows!

What are your thoughts on Jessa Seewald’s controversial decision to dress her daughter Ivy in boy’s clothing? Was it just to save money? Or, is she making a statement?