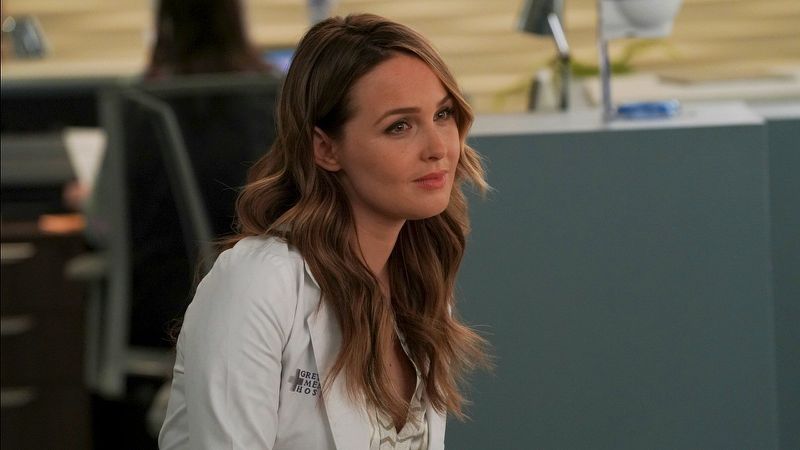 The 36-year-old British actress noted, “Okay so… Matt and I are so happy to fiiiiinally post after months of ‘hiding’ that [I] am pregnant! We are beyond excited to add to our little family and give Hayden a sibling.”

Check out Luddington’s reveal with a little help from Cinderella:

Me: “I’m just gonna do a super casual pregnancy announcement.” Also me: “I NEED PRINCESSES!!!!!!” 👑✨💫🌟👑✨🌟💫👑✨🌟💫👑 Okay so… Matt and I are so happy to fiiiiinally post after months of “hiding” that i am pregnant! We are beyond excited to add to our little family and give Hayden a sibling. And yes, I’ve been away a lot from social media the past few months because OMGGGG the exhaustion and OMGGGGGG the morning (read: alllllll day) sickness. Have I been 🤮 mid filming at work? Yep! Oh the glamor of growing new humans 🤣. But in all seriousness, we feel so lucky and I can’t wait to bring you guys along for the remaining months of this baby #2 journey!! *Shout out to the one and only Cinderella for helping me with this pic yesterday 🥰 ❤️❤️❤️❤️

Many Grey’s fans may remember Luddington was first pregnant during the filming of Grey’s Anatomy Season 13 in 2016-17. The writers did not incorporate the pregnancy into storylines at that time. This was because she was pregnant when her character, Jo Wilson, and Alex Karev were going through a rough patch in their relationship. As you may recall, Alex went to jail for assaulting Andrew DeLuca. Elsewhere, Jo revealed she ran away from an abusive marriage and changed her name.

Considering how Alex Karev was written off of Grey’s – he found out ex-wife Izzie Stevens gave birth to his kids – there’s already speculation that Luddington’s real-life pregnancy could be incorporated into Season 16-17 storylines. How messy would it be if Jo found out she’s pregnant with Alex’s kid after Alex left to be with the kids he didn’t know about?

Season 16 storylines haven’t impressed fans thus far, so this would only add to the heat.

Season 15 of Grey’s Anatomy highlighted the Owen/Amelia/Teddy love triangle, which centered around Teddy carrying Owen’s baby after Owen formed a family with Amelia. That dynamic changed even more in Season 16 when Amelia’s actress, Caterina Scorsone, became pregnant for a third time. Private Practice included Scorsone’s first pregnancy, while her second was left out of Grey’s storylines.

But it shouldn’t happen this time

As dramatic as it would be for Luddington’s pregnancy to be written into the show, it shouldn’t happen this time. We may have lucked out, too, because Luddington has already filmed a number of Season 16 scenes with a developing baby bump.

Some fans on Twitter noticed the change in recent episodes, which Luddington confirmed herself:

Haaaa. Yes it hasn’t been possible to hide for a while now 🤣 https://t.co/Q1B5oRdoJs

We have no idea where Jo’s character will go now with an impending divorce. However, she may find comfort in Dr. Lincoln if Amelia’s baby turns out to be Owen’s. What a mess!

Grey’s Anatomy airs every Thursday at 9pm ET on ABC.