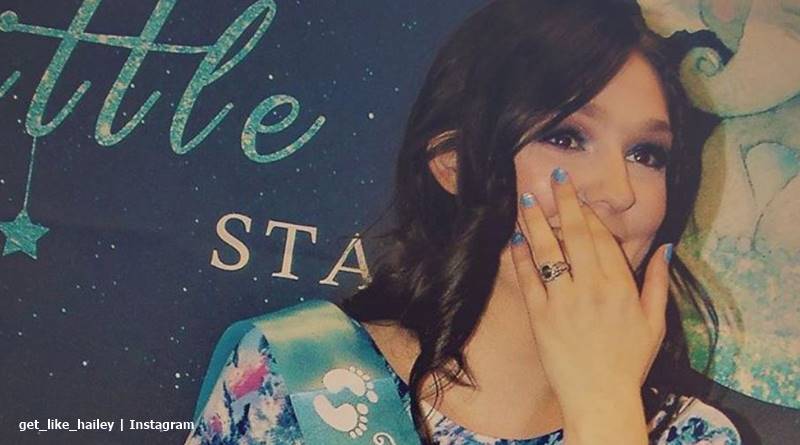 Unexpected fans heard that Hailey 2 managed to get back onto Instagram. Shut down after someone tried to hack it, she’s back and updating fans on her baby. Now going on 35 weeks pregnant, she’s not that far away from becoming a mom. She had a fun day for her baby shower this weekend and gave her dad a special shoutout for making it there after work.

TV Shows Ace reported that Hailey disappeared off Instagram without any notice. But, relieved fans later heard her account got compromised. Hailey said that it took quite some time for Instagram to help her get back online. But, she’s back and immediately reassured fans she’s doing fine with her pregnancy. Little Levi’s doing well and so is she. It looks like her family stands by her despite the unplanned baby coming along.

Fans recall that Matthew Blevins, formerly the boyfriend of Hailey 1 on Unexpected made off with Hailey 2, Hailey 1’s ex-bestie. The couple got so much hate after the baby announcement. But, Hailey also accumulated quite a lot of supportive fans. When Hailey 2 and Matthew subsequently broke up, she took out an EPO against him. However, she later dropped that after she and her dad chatted about being a mom now, and acting with maturity. Now, her dad made it to her baby shower, and she gave him a shoutout.

When Hailey 2 talked about her baby shower, she posted a lot of pics on her Instagram. Hailey gave her dad such a nice shoutout. She wrote, “Baby Shower 💙🥳 Thank you everyone for coming out and celebrating my little boy with me!” She noted that her baby boy’s already “loved” by so many people.  Then, she gave her dad that special shoutout.

Hailey noted that despite being super-tired after a long workday, he made a special effort to be there for her. She added, “You’re truly amazing!” Then she talked about how she loves all of her family members who care. Plenty of Unexpected fans reacted with love and some of them felt Hailey 2 got made the villain on the TLC show. One wrote, “I ain’t gonna lie at first I didn’t praise you, but now that I’ve seen some of your journey and how you grown as a person it made me open up my eyes and see how much you grown and how much you matured,(sic).”

Baby Shower 💙🥳 Thank you everyone for coming out and celebrating my little boy with me! Levi is loved so much already. A big shout out to my amazing dad for coming right after work even though you were tired just to make me happy! You’re truly amazing! I love all of you and so does Levi Carter ☺️

What do you think about Hailey 2 giving her dad a special shoutout for attending her baby shower? Do you think it’s great that they’re so close? Sound off your thoughts in the comments below.