The Duggar women are pretty thrifty! And, thrifting is something that they all like to do together. In the past, the family has documented their trips to a huge children’s consignment sale in Arkansas. It travels between a few cities in Arkansas in March and April. The Rhea Lana’s Amazing Children’s Consignment Event is a big deal for the family. Many of the women with children make a point to go every year.

So, it’s that time of year again. And, once again, some of the Duggar women are enjoying scavenging for good deals on baby clothing. Some of them shared about it on social media.

Abbie Duggar, who just became a mom in January, is already learning the family’s tricks for saving on baby items. She shared a couple of snaps on her Instagram stories. She said that “it’s time to shop” and included a picture of just some of the clothes up for grabs. 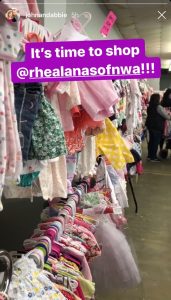 Jessa Seewald also posted a video of the selection on her Instagram stories. 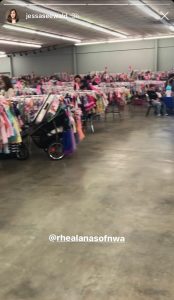 In the past, Anna and Jill have tagged along. They haven’t shared that they’ve been yet, but the event runs for several days. So, maybe they’re going later on, or maybe they didn’t document their trip this time. Often, when Duggar fans ask where the family buys their babies’ clothes, they mention that they go thrifting.

If you’ve been a longtime fan of the Duggar family, you likely know that they’re big on saving money. Their family motto is “buy used and save the difference.” Based on the recent snaps they have shared, it seems like they’re still following that. With such a large family, they had to find ways to save money. They sometimes talked about these tips and tricks on their shows.

In a recent YouTube video that Jessa Seewald shared, she talked about thrifting for her kids’ clothes. She also shared how she saves money and saves up for the bigger baby items that they need. She showed off her kids clothing haul and gave her followers a glimpse of everything she bought for her kids. Perhaps she’ll be making another video of everything she bought at the consignment sale.

The Duggar kids are following in their parents’ footsteps

As the kids have grown up, moved out, gotten married, and started families of their own, they’ve also figured things out for themselves. While some of them have stuck to the way their parents raised them, others are branching out. For example, Jinger and Jill have both started wearing pants instead of skirts or dresses. Jill is sending her son to public school instead of homeschooling him like her mother did with her. They’re all finding their groove and figuring out what works for them. Fans love the “new Jill” as she’s changed over the years.

It seems that most of the adult Duggar women agree that thrifting is the way to go. They are pretty open about how frugal they are, even though they aren’t living under Jim Bob and Michelle’s roof any longer. So, even though they’re doing their own thing, to an extent, they seem to like thrifting and saving money.

Do you like that the family goes thrifting? Share your thoughts about it in the comments below.

Isabel Roloff: Celebrating Her Pregnancy & Respecting Tori’s Loss
Joy-Anna Forsyth Pregnant?! Another Duggar Baby On The Way?
Kailyn Lowry Opens Up About Weight Gain And Nasty Comments She Receives
‘Sister Wives’ Fans Have A BIG Question For Meri Brown: Too Personal?
‘When Calls The Heart’ Season 9 Has Started Filming: All The Details