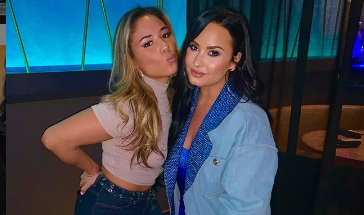 Demi told Megan, “I just loved getting to work with you, because I felt like we were, like, little schoolgirls talking about The Bachelor in between takes and all of the gossip.” Mullally agreed and said they had a lot to talk about. The former Disney star wanted to know who Megan wanted to win and they started out talking about who they didn’t want to get the final rose.

Demi Lovato And Megan Mullally Spilled The Tea about The Bachelor

When Demi Lovato asked if she wanted Madison Prewett or Hannah Ann Sluss to win, Megan said neither. She explained, “I’ve had it with the virginity thing. I don’t know, I can’t. I’m done.” She went on to say Madison couldn’t be serious if she’s ever watched The Bachelor. Megan reminded the audience, “four times in a windmill.”

Lovato said, “maybe she didn’t think she’d get that far, which I thought was funny and cute.” The two were just like a lot of Bachelor fans who have questioned where Madison thought she was. The show has always been focused on the intimacy between the lead and his finalists unless the lead was a virgin like Colton. There’s always an exception to the rule, but Peter was open with his sexuality on The Bachelorette, so Megan asked, “does she know him at all?”

I got that sunshine on my Sunday best… ☀️

Mullally Is A Super Fan Of The Franchise

Demi and Megan are just like every other Bachelor fan with their love for the show. Megan was on a group date during Colton Underwood’s season along with her husband Nick Offerman according to US Weekly. Offerman even got Krystal Nielson and Chris Randone from BIP to record a message for her for their fifteenth wedding anniversary. She’s a huge fan.

Lovato is also a huge fan of the franchise having gotten into Hannah Brown’s season. She was linked with one of Brown’s contestants Mike Johnson for a minute. The two were said to be casually dating, but ended things when they were too busy. The end of Peter Weber’s season is coming in a two-night event next week. Megan and Demi will be able to see who gets the final rose then. Although if Chris Harrison is to be believed, even Peter doesn’t know how it’s going to end.