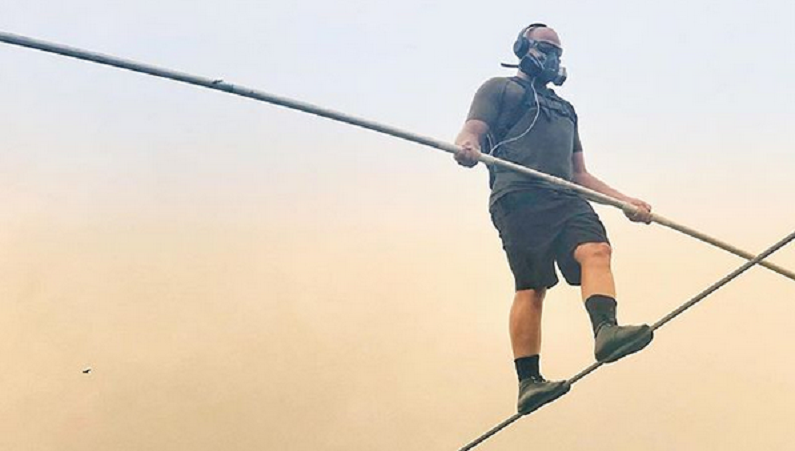 Nik Wallenda’s death-defying act wasn’t enough to keep viewers interested. Even host Chris Harrison couldn’t get Bachelor Nation to tune in to ABC’s Volcano Live! special. The daredevil was called out on social media for wearing a safety harness during the special. Some of Nik’s fans were busy dragging his haters on social media rather than watching the show.

Nik wanted to break a new record by being the first man to tightrope walk over an active volcano in Nicaragua. And he was able to do the impressive stunt all on his own. The special started on a sour note after he was roasted on Twitter for wearing a safety harness during ABC’s Volcano Live! special.

Nik didn’t want to tightrope with a safety harness, but the network made him for safety precautions. He became the first man to ever walk across an active volcano by high wire. But the extreme stunt wasn’t satisfying enough to most viewers. There was no heightened suspense since he had his safety gear on him.

Although the special was two hours long, the entire stunt took about 30 minutes. Nik braved the toxic fumes and unpredictable wind gusts. He also had to avoid the hot lava that shot out below him. It seemed like a pretty risky stunt. But viewers were still not impressed when he walked across the 1,800-foot-wide “mouth of hell” crater atop the Masaya Volcano, as per New York Post.

“Wait, so #nikwallenda has a safety harness connected to another wire?” one disappointed fan tweeted. “C’mon man, I thought this was supposed to be risky and suspenseful.”

“End Nik Wallenda 2020. So sick of this dude and his safety harnesses,” tweeted the fed-up Barstool Sports’ KFC Radio account.

When I see him wearing a safety harness, secured to the cable above him… #VolcanoLive pic.twitter.com/qtax2pmLqJ

Others came to Nik’s defense on social media. They argued that the death-defying act is about him conquering his fears.

“Yeah, there’s a harness, but I think y’all forget that this isn’t about the harness for Nik Wallenda,” one Nik Wallenda fan wrote. “The walk & all of the others are about Nik overcoming his fears & having the strength to make it across without slipping & withstanding the heat & wind.”

Everyone talking about “he’s wearing a safety harness 🥴” like there isn’t an ACTIVE VOLCANO beneath him. I wanna see y’all haters do it #VolcanoLive

This isn’t Nik’s first stunt. The high-wire artist also wore a safety hardness during his 2019 tightrope walk in Times Square. The last stunt he did without a safety harness was when he walked across the Grand Canyon in 2013. During his latest stunt, Nik spent most of his time praying, reciting Bible verses, and pitching his new book Facing Fear.

As per Deadline, Volcano Live! with Nik Wallenda wasn’t enough to entice viewers. Compared to his stunt above Times Square, his latest high-wire act wasn’t hot enough for viewers. Fox’s The Masked Singer topped the ratings on Wednesday night with 6.47 million viewers. Only 4.17 million viewers tuned in, which is down a tenth from last year’s special.

The Masked Singer even led to a successful Lego Masters, which has been steady in the ratings. The combined shows helped the network finish first in the adults 18-49 demographic. The only good news about Volcano Live! was that it led to a steady return of Stumptown with 2.4 million viewers.

What did you think of Nik Wallenda’s high-wire act? Was it enough to keep you interested? Sound off below in the comments section.