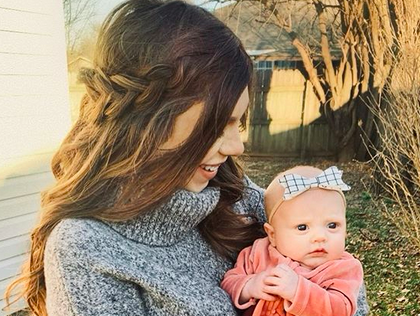 The picture features Bella laying on one of her parents’ laps. The baby girl is in a green floral print outfit and has her tiny hands clasped together.

Josiah and Lauren share an Instagram account, but it’s assumed that most posts come from Lauren. Lauren writes, “Soaking up these precious moments, because I feel like she is growing up way too fast.😭❤️”

Soaking up these precious moments, because I feel like she is growing up way too fast.😭❤️ . . .#bellamilagro

How old is Bella Duggar?

Bella is only three months old. She will be four months old on March 8. Be sure to look out for a sweet milestone post from Josiah and Lauren this weekend. They typically share highlights like those.

The couple welcomed their baby girl to the world in November. She was born after Lauren had an early miscarriage with her first pregnancy. So, they seem to be loving every moment with her and not taking anything for granted.

On social media, the Duggar couple shares all kinds of updates about their baby girl. When they posted about her turning three months old, they added that she’s learned how to turn herself over. Duggar fans are excited to see even more updates about Bella over the years.

Bella is 3 months and the happiest little girl around! Her newest little trick these days is turning over and she is so proud of it!🥰 We just love this little girl to pieces 💕 . . . .#bellamilagro #twinin #timefornaptime #thatdoublechin😍

Josiah and Lauren already plan on having a large family

Josiah is one of 19 children. Lauren is one of eight kids. So, they both come from big families, especially by today’s standards. So, it doesn’t come as much of a surprise that they plan on having a big family.

But, as mentioned, their daughter is almost four months old. So, they’ve only gotten a glimpse of life as parents. And, they still have time before they start trying to grow their family.

What do you think of the sweet picture of Bella? Is she one of your favorite Duggar babies? Share your thoughts below.