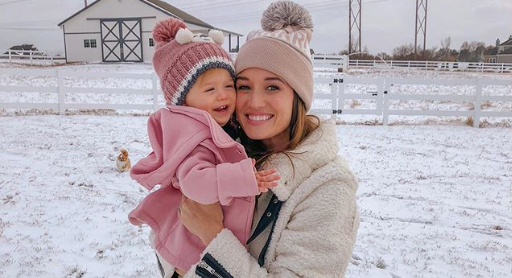 Jade Roper is no stranger to random people getting into her business on the internet. Roper  who runs the Mommies Tell All podcast, has two children with Tanner Tolbert. A son, Brooks, is the youngest and they also have a daughter named Emerson.

There are several times the former Bachelor star had the perfect comeback for those who criticized her. Here are some of the times she put people in their place for moms everywhere according to US Weekly.

Jade Roper Always Defends Her Kids And Her Parenting Choices

She spoke out for all moms in 2019 when she said, “we already as moms have enough guilt.” Roper said people parent differently and do what’s best for their families. As if anyone can be the perfect parent but, “people like to bring that in and try to put it on top of you.”

Jape Roper said there are so many things to be shamed about as a mom. As a reality personality she’s heard about big things and little things from strangers. From if your child is vaccinated, to how long they breastfeed, to are they wearing a coat outside. She said everything is, “so drastic.”

I love those sweet smiles! Thank you @tanner.tolbert for helping make these beautiful babies! We are so lucky to have their love. #valentines

She’s not always someone who responds to the negativity. Carly Waddell, Roper’s former co-star loves her clapbacks. According to US Weekly Carly said, “sometimes when you feel really strongly about something, you will post a comment back that is so well-worded. It’s like, what every mom wants to say.” She told Roper that she shuts those people down in the nicest way.

The Parenting Police Have Mentioned Almost Everything

Some fans who followed Jade Roper last year had commented that they thought her daughter Emerson was showing signs of autism. Roper said right away that those messages were not okay to send. She told everyone they had a good pediatrician and, as parents, she and her husband knew her development.

When fans were upset with her for posting a picture breastfeeding her son, she didn’t apologize. She said, “breast-feeding is how babies eat. You see more boob in a bikini.”

Most recently, in March 2020, she said she was sick of it when someone posted that her daughter was an idiot. She hesitated to walk down the aisle at a wedding as the flower girl like a lot of kids do. Roper said, “there’s a lot of hurt in this world, but love is the answer.” She went on to say that among other things her daughter was smart, warm, caring, brave, and they were wrong about her. Jade Roper continues to be a source of strength for women and mothers everywhere.