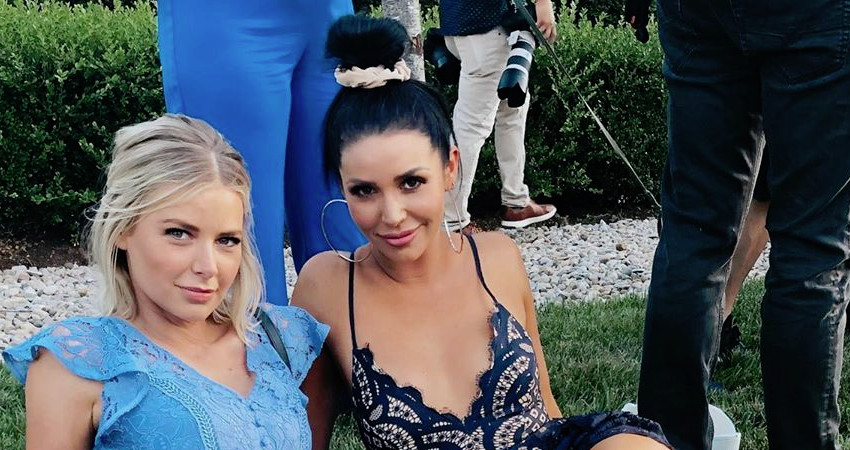 Vanderpump Rules star Scheana Shay is being portrayed as jealous and boy crazy. But she wants fans to know she’s more than the hook-ups they see on the show, Reality Tea reports.

Co-star Ariana Madix backs Scheana up on how Dayna Kathan is edited differently than they are.

Ariana Madix appeared on a recent episode of Scheana’s podcast, Scheananigans. The subject came up of Scheana being portrayed as ‘jealous’ of Dayna and Max Boyens dating in earlier episodes of Season 8.

As fans learned in the first episode of the new season, Max and Scheana briefly dated before filming began. They were still hanging out as “friends,” when Max started dating Dayna.

Scheana was shown hazing Dayna by assigning her busy-work at SUR instead of training her on serving tables. The SUR newbie confronted Scheana several times, wanting to know what the problem was.

In the latest episode of Vanderpump Rules, Scheana inserted herself into Brett Caprioni and Charli Burnett’s would-be relationship. The Good as Gold singer also briefly hooked up with Brett before Season 8. He even told producers that Scheana is a bad kisser.

Ever since Scheana got divorced, her edits on the show have been mostly about her dating life. She says on her podcast,

“Literally, all you see about me is boy crazy Scheana who is desperate for a man and doesn’t do anything else but work at SUR.”

Ariana agreed with her friend. Even though she’s opening up more this season, the show focuses on her relationship with Tom Sandoval. She vented to Scheana,

“I have been frustrated in the past at times when I feel like my existence is reduced to my relationship. I’ll see people say ‘Well, what does Ariana do besides date Tom Sandoval?’ People would know if they show what you’re working on.”

Ariana and Scheana Have Nothing Against Dayna For Her Success

Don’t misunderstand Scheana and Ariana. They aren’t hating on Dayna for trying to get her comedy career off the ground.

However, they point out that VPR doesn’t showcase the lives of long-running cast members outside of SUR.

Ariana points out that Bravo never filmed Scheana’s Vegas show, her podcast or other interests. Kristen Doute has a clothing line that’s never featured on the show.

Scheana reveals that very few of her co-stars came to Vegas to support her show. She says,

Yeah, I get it, it wasn’t around the corner, but almost every person in our friend group was in Vegas during those five months I was doing the show.”

Despite their grievances, both agree that it’s ‘amazing’ for Dayna to be able to do what she loves on the show.

TV Shows Ace reported last week that Scheana’s cousin, Phil Tate, went missing from Riverside, California. Her family is frantic to find him because he’s suffering from dementia and also has diabetes, meaning he needs medication.

Sadly, Scheana gave an update that he still hasn’t been found. Several co-stars reached out to help the VPR star by sharing details of the situation with their social media followers.

Vanderpump Rules Season 8 continues Tuesdays on Bravo. Next week, Dayna learns that Max isn’t as loyal as she thinks.