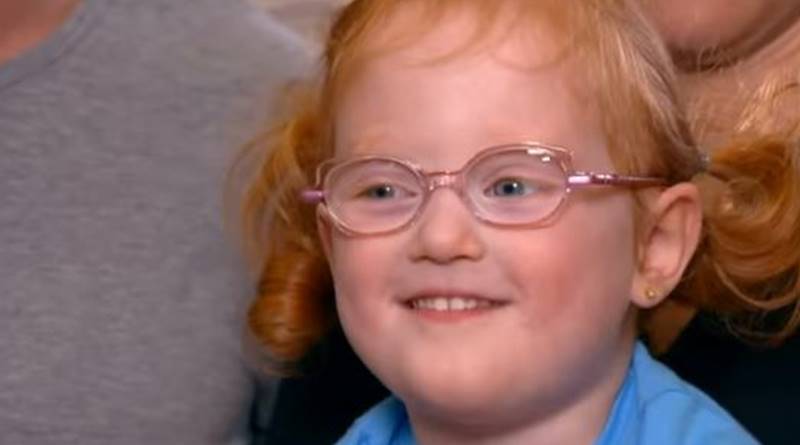 OutDaughtered fans dote on all the Busby quints. But one of their favorites, little Hazel’s easy to identify. That’s because she’s the only red-head, and she wears glasses. But, she’s also got a cheery smile and a big personality. Now, fans fell in love with 4-year-old Hazel’s cute little red-haired baby-doll, that’s just like her.

On his @itsabuzzworld account on Instagram, Adam Busby shared a photo of four of the quints. Riley’s at kindergarten, so she’s missing from the photo. The four girls, Ava, Olivia, Hazel, and Parker all sit in a row, showing off their Graeson Bee outfits. Sitting in the middle, wearing her pink glasses, Hazel holds a baby-doll and it’s got red hair just like her.

Fans simply loved the idea of the red-haired OutDaughtered starlet enjoying a doll with red hair. Many fans commented on it, hoping to find one for themselves. Others gushed about how cute she looked. Yet more thought it a great idea to give her a doll she could identify with. Actually, it’s interesting that the Busbys found her a red-haired baby-doll, as fans hunt around for their own. It seems these baby-dolls are scarce on the market, just like red-haired people are rarer in real life.

Did you know that red hair usually traces its way back to the Irish? Although not uncommon in Scandanavian countries, the red gene there probably came from Irish people taken into captivity by the Vikings. Both parents need to carry the MC1R gene. Eupedia.com notes that “as a recessive trait it must be inherited from both parents to cause the hair to become red.”

That means more people carry the gene than actually grow red hair.  So, both Adam and his wife Danielle could possibly trace their ancestry back to those old Irish roots. The OutDaughtered couple produced a relatively rare coloring when Hazel got conceived. After all, according to the National Institutes of Health, the “somewhat rare gene…occurs in only about two percent of the world’s population.”