Tuesday, March 3 was Super Tuesday in the United States. Lots of people all over the country went out to vote in the primary election. Only 13 states vote on Super Tuesday, but Arkansas is one of them. And, the Duggar family happens to live in Arkansas.

On social media, some of the adult kids in the family revealed that they voted. Not everyone in the family dedicated a whole Instagram story or post to Super Tuesday. But, a few of them did and encouraged their followers to participate too.

On Tuesday, Jill Dillard shared a picture of her two sons, Israel and Samuel. As TV Shows Ace reported, Jill shared that she took her boys along with her to vote. They even filled out sample ballots.

Jedidiah and Jeremiah voted too. Jed is actually running for a position in office in Arkansas. So, the election was even more important to him. Plus, it makes him look better as a candidate if he’s active in the community and using his voice. Jeremiah is his twin brother and his campaign manager. The two young men snapped a selfie featuring their stickers as proof that they voted.

It’s a beautiful day in Northwest Arkansas and it’s Super Tuesday! Make your voice heard today and get out and vote. 🗳🇺🇸 Find your polling place online at voterview.org. #supertuesday #vote2020

Jana, the eldest Duggar daughter, went to the polls on Super Tuesday. On Instagram, she shared a picture of her “I voted” sticker. In the background, out of focus, are her keys and a Starbucks cup. She wrote, “If you didn’t get a sticker did you really vote? ❤️🗳🇺🇸”

If you didn’t get a sticker did you really vote? ❤️🗳🇺🇸

Finally, Josiah and Lauren used their voices. On their shared Instagram account, they posted a selfie. In the picture, Josiah is wearing his sticker while Lauren holds hers up. 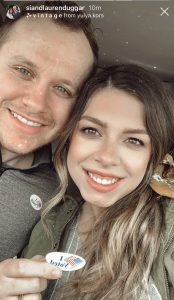 Did the other Duggar kids vote?

It’s assumed that many of the other kids in the family voted. The only one who doesn’t live in Arkansas is Jinger Vuolo. She and her husband, Jeremy, live in California. California is another state that participates in Super Tuesday. It’s unclear whether Jeremy and Jinger voted because they didn’t document it on social media.

As mentioned, some of the kids definitely see the importance in voting. They even chose to share about it on social media to encourage others. But, not everyone chooses to reveal whether they voted.

Because Jed is running for office in Arkansas, it’s likely that the family places a little more emphasis on going to the polls. But, ultimately, it’s up to the grown kids whether they vote. So, fans aren’t quite sure who voted outside of the ones who shared about it on social media.

Are you glad to see the Duggar family using their voice and voting? Share your thoughts about this below.

Danielle Busby Cranks Up The Heat, Flashes Hint Of Cleavage: See Photo
‘General Hospital’ Spoilers: Is A Maxie Recast On The Way?
‘Y&R Spoilers : Who Kidnapped Mariah Copeland And Where Is She?
Whitney Way Thore Tired, Exhausted, & Annoyed By It All
‘Panicked’ Tori & Zach Roloff Spill Scary Preschool Issue With Jackson