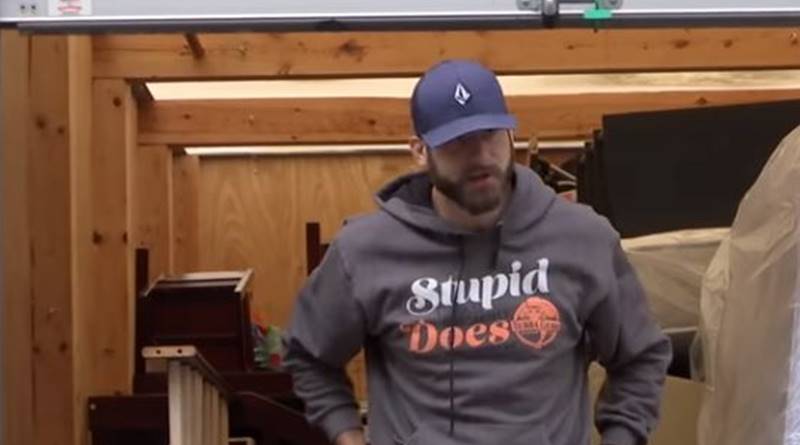 Teen Mom fans know that David Eason justified killing their Frenchie, Nugget, as it nipped at Ensley’s cheek. Fans were shattered to see that David now encourages Ensley to climb all over and get her face in another dog’s face. Sharing a video, he encouraged the behavior. Shocked fans started commenting, but he soon locked down the comments on his Instagram post.

Fans might recall that when the huge news swamped the internet that David Eason killed Jenelle’s pup Nugget, he justified it. David showed a clip with Ensley and revealed a small red mark on her cheek. The fallout led to the kids taken away, custody cases, and Jenelle Evans left him. TV Shows Ace reported that after fans complained, North Carolina Animal Control visited the place. But the body of Nugget remains missing.

Now back on The Land with David, Jenelle and David Eason recently acquired a new pup. The Ashley’s Reality Roundup noted them out and about buying a new dog bed. They also remind fans that the Teen Mom alums got a new dog. Now, David shared a video but it doesn’t appear to be the new golden Labradoodle pup they got. Maybe it’s one of David’s other new dogs he acquired.

On his Instagram, David shared several clips of Ensley climbing all over the dog that he called, “Junior.” It looks like some sort of shepherd. David noted in the caption, “Dogs are meant to be loved on, kissed in the face and tolerant of children’s behavior. Junior is such a gentle, loving boy like all dogs should be!” Well, at one stage the dog looked alarmed as Ensley cuddled it right close next to her face and pulled on his ear.

Horrified fans started commenting, but David soon shut the comments. However, one Teen Mom follower noted that “dogs are not robots.” They also noted the discomfort the dog shows, say the dog looks “uncomfortable.” The fan couldn’t get over the fact that Ensley isn’t being taught to respect the space a dog needs. They added, “your kids gonna get bit again.”

I can’t believe someone would sell them a dog after Nugget-gate. pic.twitter.com/sRt11w0Xaz

After getting some backlash, the Teen Mom 2 alum shut down comments. Really, it’s obvious that sort of post would bring out the haters. David might not be thinking about Ensley and Nugget, but MTV fans are. What do you think about the clips of Ensley with the dog? Do you think it’s just asking for trouble? Sound of your thoughts in the comments below.

Remember to check back with TV Shows Ace often for more news about the cast of Teen Mom.