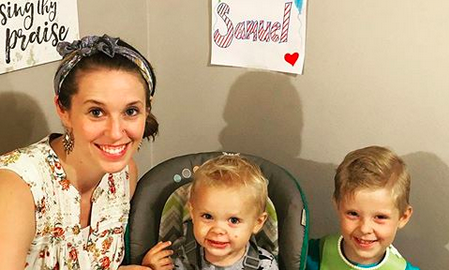 Jill Dillard and her Duggar sisters were reunited this weekend! It was a special time because Jinger Vuolo was back in town from Los Angeles, California. So, the sisters, along with their mom and some of the little ones in the family, enjoyed some time together. They went out to breakfast one day (without Jill). The next day, they ate at Panera and went on a shopping trip.

One place they shopped is Target. On social media, the women documented their Target run. They seemed to be enjoying themselves, as most people do while at Target. Fans really liked seeing the sisters catch up with one another. But, fans did have one problem with how Jill parented her kids while shopping.

Jill lets her sons use her smartphone at Target

In one picture from her Instagram stories, Jill reveals that her sons were using her smartphone while she was checking out at Target. Jill has two sons, Israel and Samuel.

In the photo, the two boys are sitting in the cart, looking at the smartphone. They look to be content. But, some fans are taking issue with this. 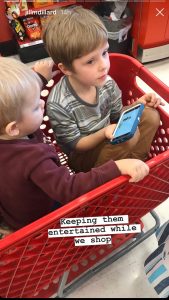 Duggar fans and critics alike are accusing Jill of letting her smartphone babysit her children for her. They think that she shouldn’t rely on technology in that way. Plus, they think it’s making her kids dependent on her smartphone or another electronic device.

So far, Jill hasn’t responded to these comments. She doesn’t typically react to the criticism, but her husband, Derick, does. Maybe he will have something to say to her negative followers.

Some Duggar fans are defending Jill

Some of Jill’s followers really dislike seeing all the hate about her. They think she’s doing a great job of being a parent. They argue that everyone lets their kids use their smartphones sometimes.

There’s also the chance that the boys were having a hard time being out so long. They might’ve been tired and wanting to go home. Maybe Jill just needed a break so she could pay for her things. Plus, there’s no telling how long her boys were using her phone for. It could’ve been for just a few minutes.

No matter what her reasoning is for giving her kids the smartphone, she seems to have support. Many of her followers say they do the same thing for their own children or grandchildren.

What do you think of Jill letting her kids use her smartphone? Do you think it’s okay, or is it a big deal? Share your thoughts below.