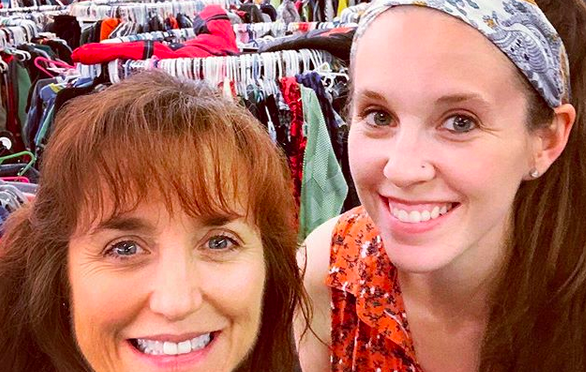 The Duggar family is known for having a large family. They’re also known for having strong, conservative, Christian values. So, it comes as a bit of a surprise that some of their adult children are choosing to live their lives differently. The women in the family are expected to wear skirts instead of jeans. They’re encouraged to have a lot of children. They’re supposed to dress modestly. The list continues. But, not all of them are sticking to their parents’ way of life.

Jinger Vuolo and her husband Jeremy moved to Los Angeles, California. Jinger has been wearing jeans instead of skirts, has dyed her hair, and has had just one child in three-and-a-half years of marriage. Though this is nothing earth-shattering for most people, it’s a big deal in the Duggar family.

Jill Dillard is another one in the family who seems to be stepping outside of the family’s values. Again, she’s not doing anything out of the ordinary. But, it’s definitely different from how her family usually rolls.

Jill wore ripped jeans, a lower cut shirt, and a nose piercing with the Duggar family

As reported by TV Shows Ace, Jinger flew into Arkansas to spend time with her family. Though Jill missed one day of catching up, she met up with her sisters the second day. They enjoyed Panera and shopping together. In the pictures the family shared, Jill is showing off her new style.

She wore ripped jeans, while the rest of the family wore skirts. Not to mention, her jeans have rips in them. Her shirt is cut lower than the other women’s shirts. No cleavage is showing, but it’s more low-cut than expected. She also has her nose pierced, which fans know about from social media.

None of this is anything scandalous for most people. Once again, she’s a Duggar daughter, which makes it an even bigger deal.

Jill is sending her son to public school

Jill and Derick recently revealed they’re sending their five-year-old son, Israel, to public kindergarten in the fall. This came as a shock to Duggar fans because Michelle has homeschooled all of her children. Plus, Jill has homeschooled Israel for five years.

TV Shows Ace reported on the couple’s decision to send Israel to public school. Some fans have been concerned that the things schools are teaching are “too worldly.” Fans have a lot of fears about Israel going to school, but Derick explained that the decision wasn’t made lightly.

While many Duggar fans appreciate the family’s values, others think they’re very extreme. So, they think it’s nice to see Jill branching out and figuring things out for herself. They notice that she’s still religious and adheres to some of her family’s values. But, she’s also finding what works best for herself and her family. Her fans applaud her for that. They say that they’re loving the “new Jill.”

One of her followers wrote, “2020 Jill is giving me life! Blue jeans with holes, short hair, nose ring, & Izzy starting kindergarten!!” Other followers shared the same thoughts. They love where she’s going and don’t think she’s harming anyone by being herself.

What do you think of the new Jill? Do you think she’s going crazy, or do you like that she’s branching out? Share your thoughts below.

2 Other ‘RHOBH’ Stars Are Dealing With Their Own Legal Drama
‘My Big Fat Fabulous Life’ Season 9: Air Date, What We Know
Brush Up On Brendan Morais Before ‘Bachelor In Paradise’
Maddie Brown Brush Gets Relatable About Cooking & Groceries
‘B&B’ Spoilers: Steffy And Brooke Battling Over Forrester Again?