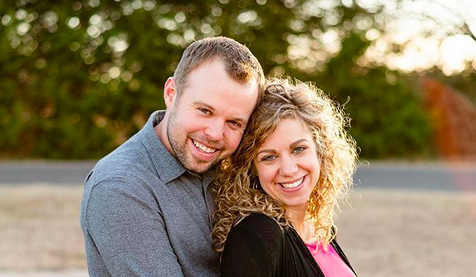 Abbie Duggar, John-David’s wife, is already loving life as a new mom. She documented how motherhood is going in a new photo on Sunday. In the picture, she’s wearing her nearly two-month-old daughter in a carrier. They’re at Target with the rest of the Duggar women, as reported by TV Shows Ace. Jinger Vuolo and her one-year-old daughter Felicity were in town for a visit, so the girls all went out to Panera and Target.

Abbie and John share an Instagram account, as do several other Duggar couples. It appears that this most recent post is from Abbie. She writes, “Gracie and I had so much fun shopping with all the girls on Saturday! Love my little shopping buddy.”

Fans assume that Abbie enjoys “babywearing”. In the photo, she’s got Gracie in a baby wrap and is wearing her against her abdomen.

In the comments section, some of her followers asked her about the baby wrap and whether she likes it. She told her followers what type of baby wrap it is so they can buy it themselves. Abbie says that they “really like it!”

Of course, some of her followers were critical and told her that she was wearing her daughter incorrectly. They offered unsolicited advice about how she should adjust the carrier and her baby. Abbie doesn’t seem to be bothered by criticism, so it’s unlikely she’ll respond.

John and Abbie’s baby Grace is the newest member of the Duggar family. She was born January 7, so she’s almost two months old now.

They named the baby Grace Annette. The birth of the baby was featured on TLC’s Counting On. Plus, John and Abbie have been sharing sweet pictures of their baby girl as she grows.

John and Abbie haven’t had long to adjust to parenthood. Based on Abbie’s latest picture with baby Grace, it seems that she’s getting the hang of things. She’s already getting used to being a mom and seems to be doing a good job.

Lots of Abbie’s followers left encouraging comments on the post. One said, “Motherhood looks FABULOUS on YOU! That SMILE on your face says it all!” Others said similar things to brighten the new mom’s day.

What do you think of the new picture of Abbie and Grace? Are you excited to see Abbie as a mom? Share your thoughts in the comments below.