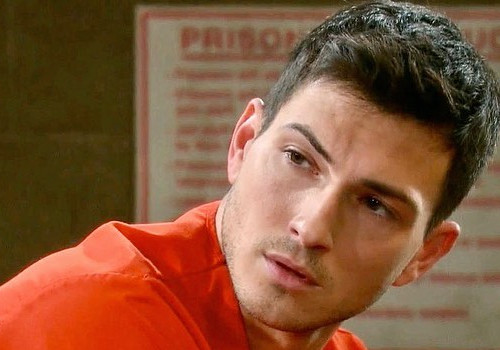 Can you believe it’s been 20 years since Sami (Alison Sweeney) was sentenced to death by lethal injection on Days of Our Lives? Ben (Robert Scott Wilson) faces the same fate this week on the daytime drama. Can Ciara (Victoria Konefal) save her beloved in time?

What else can fans expect to happen in Salem this week?

Ciara Puts the Pieces Together and Realizes Who Killed Jordan

Ever since Ben was arrested for his sister’s murder on DOOL, Ciara has worked tirelessly to find the true culprit. At one point, she thought Xander (Paul Telfer) killed Jordan (Chrishell Stause) at Victor’s (John Aniston) behest.

As fans know, they were covering up Maggie’s (Suzanne Rogers) role in the death of Adrienne (Judi Evans.) The innocent man they framed was Will (Chandler Massey,) not Ben.

Ciara and Will team up to prove that Ben is innocent of murder, too. Ciara eventually puts the pieces together and learned the true killer: Evan (Brock Kelly.) Spoilers indicate the nanny has a surprising connection to Jordan.

Will Ciara stop the execution in time?

The entire time jump storyline kicked off with Princess Gina (Kristen Alfonso) pushing Jennifer (Melissa Reeves) off a balcony, causing her to fall into a coma for one year. When she awoke, she had no memory of who pushed her.

Jennifer recently regained her memory and Princess Gina’s time pretending to be Hope is over. Now in jail, Jennifer pays her ‘cuz’ a visit. Hope’s family is still trying to get through the brainwashing to bring Hope back.

Justin and John Race to Save Kayla

Last week on DOOL, ‘Stefano’ (Stephen Nichols) revealed to Justin (Wally Kurth) that he’s holding Kayla (Mary Beth Evans) hostage. Justin quickly clues John (Drake Hogestyn) in and the duo team up to get her back.

However, things don’t go as planned. Did Justin lead John into a trap?

Nadia Bjorlin (Chloe) was last seen on the broadcast version of Days of Our Lives in August of 2019. However, she had a main role in the soap’s digital series Last Blast Reunion.

The DOOL star confirmed on Twitter that she will be transitioning from the digital series back to the traditional format later this year.

Thank you, sis! You’re the best decision of all time! 😝☺️😘❤️

Savannah Chrisley Spills Secrets To Her Perfect Complexion
‘Bringing Up Bates’ Sisters Bond Through Hard Times
‘Seeking Sister Wife’: The Winder Family Takes In Creepy New House Guest
What Does Jacob Roloff Do For A Living & Does He Still Live In A Van?
Lauryn ‘Pumpkin’ Shannon’s Baby Boy’s Name: When Will Fans Meet Him?