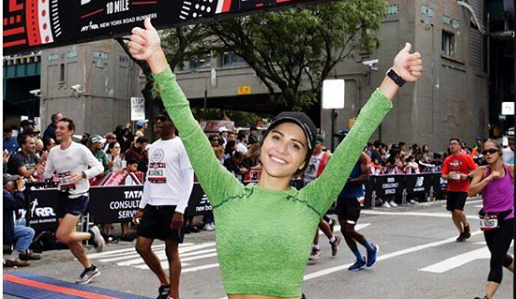 When asked if her and Tyler Cameron were together, Andi Dorfman said, “I tried but he wasn’t having it.” Then she said she was just joking. The two had been romantically linked since they both ran the New York City Marathon together. A picture of Dorfman kissing Tyler on the cheek was released and Bachelor Nation took notice. Anytime two people in the Bachelor universe are spotted together the rumors get started.

She said, Cameron and Matt James both made her laugh so hard all the time. Andi said about Tyler that, “he is literally one of my favorite humans and we have a good banter. We give each other a hard time but are also supportive of one another without any judgments.”

Tyler Cameron said Andi Dorfman was there for him to reach out to. He said it was helpful, “because she’s been through it on both ends as the lead and as a contestant, but there’s nothing romantic between us.” Tyler caught America’s attention first by competing for Hannah Brown’s heart against two other men in her final three. Hannah also asked Tyler out on After The Final Rose when her number one pick had a girlfriend right before the show.

While Tyler moved on after Hannah Brown and his relationship didn’t work out, him and Gigi Hadid broke up after two months of dating. According to US Weekly, a friend said they were still friends. The source said, “he still likes and respects her, even though the romantic portion of their relationship is over.”

Tyler Has Moved In With Matt James

The reason Andi Dorfman mentioned Matt James is because he is Tyler Cameron’s roommate. The two men have moved into a new apartment in New York. Tyler gave himself and his roommate a cute bromance nickname, Myler. He’s also had some family worries with his mother being sick. Recently he had to cancel an appearance on Good Morning America to take care of a family emergency.

Andi Dorfman said when asked if she’d be The Bachelorette again that they probably wouldn’t want her. She said, “I’m either too boring or too single or on the sh–t list, who knows.” Fans continue to follow both her and Tyler Cameron and hope they can find love again. That’s always the hope for anyone who doesn’t find love on the show, that they still will.