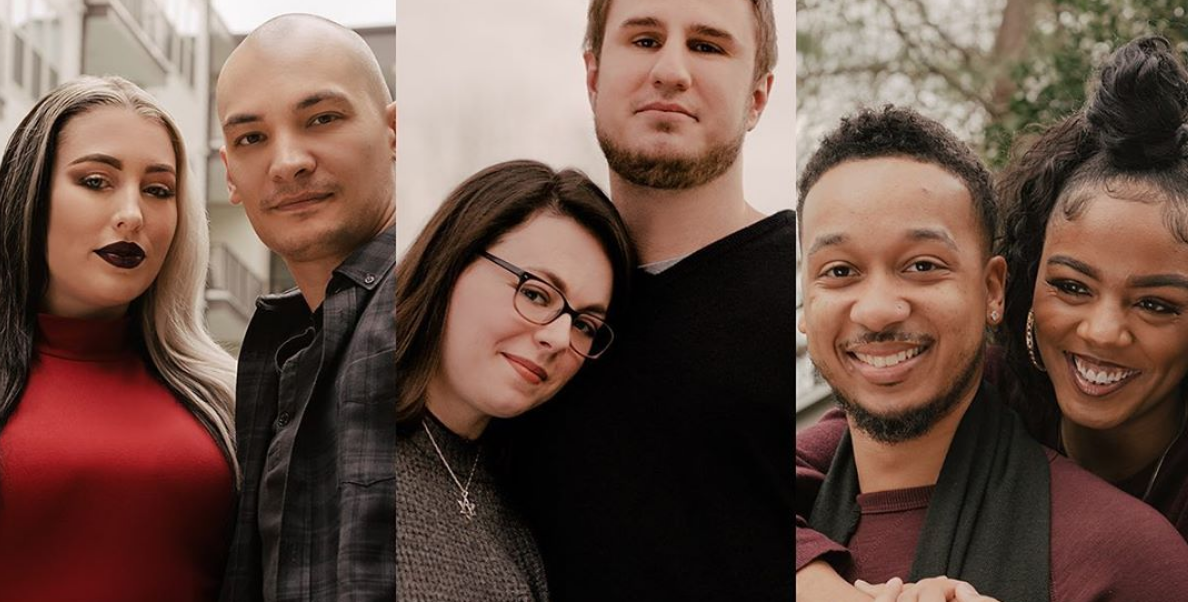 The Lifetime premiere of Bride & Prejudice: Forbidden Love launched last night, February 26, right after Married at First Sight. The reality marriage shows make perfect companions in some ways, and yet are very different. In Bride & Prejudice: Forbidden Love, there are no surprises in who the couples are. Most have been together for months or years. They have very firm commitments to each other. The stumbling block for these betrothed pairs is family opposition. This opposition is based on matters of race, faith, and in one case, only a few years’ difference in age.

Pastor Cal Roberson, the longtime relationship expert from Married at First Sight, aims to steer the couples and their families to “common ground”. He explained this in the premiere episode, “Will You Marry Me?” Along the way, Roberson will assign tasks to hopefully bring the intended partners and the families to the same page. At the end of the four week period, the Bride & Prejudice: Forbidden Love partners will have a choice. They can celebrate “the wedding of their dreams” as Pastor Cal describes, or decide to break up.

The first episode was equal parts sweetness, passion, and tension. Three couples introduced their histories and made their plans to marry official.

The first couple highlighted in the premiere of Lifetime’s version of Bride & Prejudice: Forbidden Love was Willi and Cameron. Willi comes from a devout Jewish family, while her fiancé, Cameron, is Christian.  The situation is no surprise to Willi’s family. The two have lived in their home for two years. But, when it comes to marriage, the parents are insistent that Cameron converts to Judaism. This is in order that their grandchildren are raised Jewish.

Heavy included a very cozy picture of the two in the family kitchen in a February 26 preview feature. Cameron has not proposed to Willi yet, because he wants to secure her father’s blessing before taking that step. Both partners conveyed that they cannot see life without one another.

Pastor Cal told Cameron that he had to meet with Willi’s father in the next episode, and tell him that they plan to marry. All the couples were told to set a wedding date in four weeks. In that time, Pastor Cal hopes to bring resolution between the pairs who feel destined to be together and their families through the process of Bride & Prejudice: Forbidden Love.

From what we’ve seen, Blair and Chris seem made for each other, no matter what Blair’s mom believes. Blair is a horror movie producer, and Chris is a studio technician. His grandparents literally crossed over, risking their lives at the North Korean border. The grandfather carried his wife on his back to get to a better life in a free country. Their heroism made it possible for Chris to be an American, but Blair’s mother continually harps that her daughter’s fiancé is from “a communist country,” and never looks to the story beyond. Mom also doesn’t care for what she calls the “bad boy image” Chris cultivates with his motorcycle and tattoos.

Chris certainly has kismet with Blair. He planned his proposal to his goth-looking girl in a cemetery. It’s complete with a spread of wine and cheese on the green grass. Of course, she was swept away with the romance and loved her onyx black engagement ring. These two were also told that they had to tell her mom about their engagement.

Kiandria goes by Kiki on Bride & Prejudice: Forbidden Love, as well as to her friends and family. She has been with Kareem for almost 4 years. Romance blossomed between these two when Kareem was just 20, but the relationship has stood the test of time and travel. The two run their own company, with Kiki “creating the masterpieces” as Kareem gushes, while he handles the marketing and sales.

Rose petals in the shape of a heart waited at the end of a Ferris wheel ride for these two, along with a beautiful engagement ring for Kiki.  She was more than blushing when she accepted Kareem’s dedication to make her his wife. The couple made a big move in the past year from Huntsville, Alabama to Atlanta. Kiki’s mom isn’t pleased about that, either. Kareem has become a very important father figure in the life of Kiki’s six-year-old son. Whether Kiki’s mom likes it or not, they have become very much a family unit already. The reality of relationships is already deep and complicated on Bride & Prejudice: Forbidden Love. “It keeps getting cuter and cuter,” Kiki said of their relationship.  Real and lasting relationships leave “cute” out the window pretty quickly, but it’s certainly okay for proposals.

Real feelings are a shocker on Bride & Prejudice

After some basic introductions between the three couples, who will have support from one another through their Bride & Prejudice: Forbidden Love experience, Pastor Cal showed each couple video segments with their family members.  The young lovers seemed genuinely shocked by the no-holds-barred revelations in their comments.

Willi’s father said that he would rather his daughter “have her heart broken now rather than later.” He absolutely insists that Cameron converts to the faith. Willi also had never heard from her grandmother. Her grandmother adamantly expressed that the family’s faith is “our history and connection.”  Tears came to Willi’s eyes, and Cameron was awestruck with the seriousness of the situation. He realizes now how pivotal his meeting with her father will be.  This Bride & Prejudice: Forbidden Love challenge will go to generationally deep for this couple.

Blair’s mother said that she had only met Chris once and he didn’t offer much information or personal connection. Again, her fears of “communism” came up. None of us have any control over the lineage of our genetic heritage. This couple is up against prejudice truly beyond their control. Mom also reiterated that she wanted grandchildren “who look like us,” delivering the ultimate slap. Blair told Pastor Cal that she wasn’t sure if her mother could ever approve of their marriage, but the expert told them that they would have to tell her they were engaged.

Kiki and Kareem face the heat first on Bride & Prejudice

There was more than the age difference between her daughter and her intended that bothered Kiki’s mother. It seemed to be just about everything. Mom slung aspersions that Kareem was “a mama’s boy” and not a man. She also insisted that he was not the right person to raise her grandson, although the evidence certainly leaned otherwise.  She seemed resigned to the fact that she could not impede the relationship, saying “I can’t stop them,” especially since they live several hundred miles away now.

Kiki and Kareem were the only couple seen in this episode actually meeting with Kiki’s mom, Marvelene. The prospective mother-in-law was already unhappy because of coming “to the big city.” Kareem complimented her jacket and gave her a warm hug. He had wanted to tell her about his background, how he came up by his bootstraps. But, Kiki cautioned that approach might be “too deep.” Kiki and Kareem had broken the news that they were going to be married just before the close of the first night for Bride & Prejudice: Forbidden Love.

Romance and raw issues are on tap for the next four weeks of this reality romp.  Let’s hope there are more dreams come true than nightmares. Bride & Prejudice: Forbidden Love airs Wednesday on Lifetime following Married at First Sight.