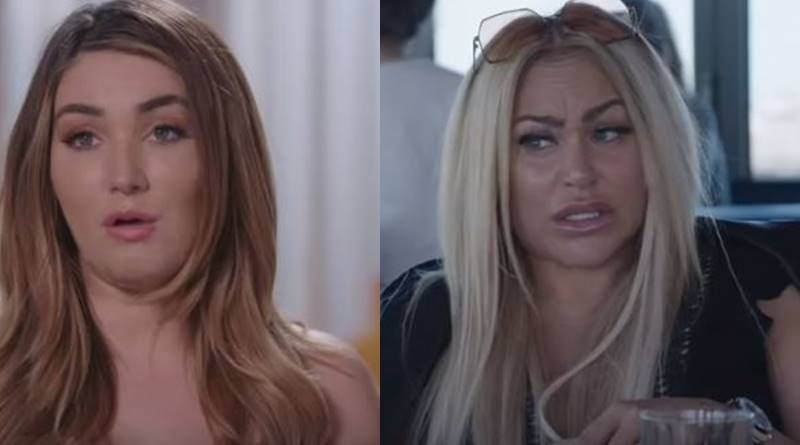 90 Day Fiance: Before the 90 Days fans didn’t see Stephanie Matto and Erika Owens feature on the premiere of Season 4. However, they just need to be a bit patient. In the meantime, one person who met Stephanie raved about her, and what a nice person she is. That someone is Darcey Silva.

TV Shows Ace noted that Stephanie Matto and Erika Owens come to TLC as the “first same-sex couple.” Erika’s an Australian photographer and Stephanie’s a well-known YouTuber. Stephanie’s from Yonkers, New York. The social media influencer actually met Erika online. But, at the time, she had no idea they’d eventually become romantically interested in each other. As fans know from the preview, Stephanie’s not comfortable with her mom finding out that she prefers other women. Plus, her family doesn’t even know she’s in a relationship with Erika.

The New York Post suggests we’ll see some fireworks there, as she said that she “tested coming out” with her mom. But even just joking about being “done with men,” she “never took it well.” Bear in mind, before the two women on 90 Day Fiance hooked up, they both previously dated guys. Now, one of the cast from the same show, Darcey Silva, veteran TLC star, met Stephanie and raved about what a nice person she is.

Stephanie took to her Instagram on Tuesday and shared a photo. Her caption read, “Insert generic quote about self love or positivity here” *waits for people to tell me im hot.” Well, fans did just that. And Darcey also reacted to the post. Darcey said, “Loved meeting you today! You’re beautiful inside and out! Love your energy keep inspiring! ❤️.”

Certainly, it looks like the two hit it off as Stephanie’s reply seemed equally complimentary. She wrote, “Awe thanks Darcey!! And the same to you, you were glowing today! Had such a nice time chatting, hope to see you again soon ❤️,” Well, Darcey responded in kind. So it looks like Stephanie’s got herself a “golden” fan in 90 Day Fiance‘s Darcey.

Erika Owens talks about not appearing on the premiere

Meanwhile, on the same day, Erika also shared on her Instagram. She posted up a photo of herself with neon pink and blue hair, with a giant head bow. She captioned her post with, “Surprise!! No appearance from us on 90 Day Lesbiance today y’all! Maybe next week 🏳️‍🌈🏳️‍🌈🏳️‍🌈.” Some fans expressed their disappointment in that. One fan noted, “Oh! So I didn’t miss anything! I’m only watching the season to route you guys on to be quite honest!”

After a few more comments, Erika reminded people that 90 Day Fiance doesn’t always show everyone in the same episode. She noted, “For those who don’t know, it’s totally normal for couples to be spaced out like this – so keep waiting patiently and you’ll see me on your screens soon I pinky swear 🤞🏻💖.”

Surprise!! No appearance from us on 90 Day Lesbiance today y’all! Maybe next week 🏳️‍🌈🏳️‍🌈🏳️‍🌈 ⠀ ⠀ For those who don’t know, it’s totally normal for couples to be spaced out like this – so keep waiting patiently and you’ll see me on your screens soon I pinky swear 🤞🏻💖 for now tune in on TLC Go to watch the other amazing people featured in this weeks episode! I am so very excited to see everyone’s stories unfold across this big beautiful world 🌍✈⠀ ⠀ #90dayfiance #beforethe90days #90dayfiancebeforethe90days #tlc #realitytv #loveislove #lgbtq #lgbtqia #lgbt #samesexcouple #ldr #longdistancerelationship #longdistance #90gayfiance #90daylesbiance #dollskill #australianfashion #australianlabel #handmadefashion #alternativefashion #sustainablefashion #slowfashion #bodypositivity #positivemindset #pinklovers #adelaidefashion #melbournefashion

So, if you’re one of those waiting, it’s coming soon. What did you think of Darcey Silva hitting it off with Stephanie when they met up? It looks like Darcey made herself a new friend. Sound off your thoughts in the comments below.

Remember to check back with TV Shows Ace often for more news about the cast of TLC’s 90 Day Fiance: Before The 90 Days, Season4.