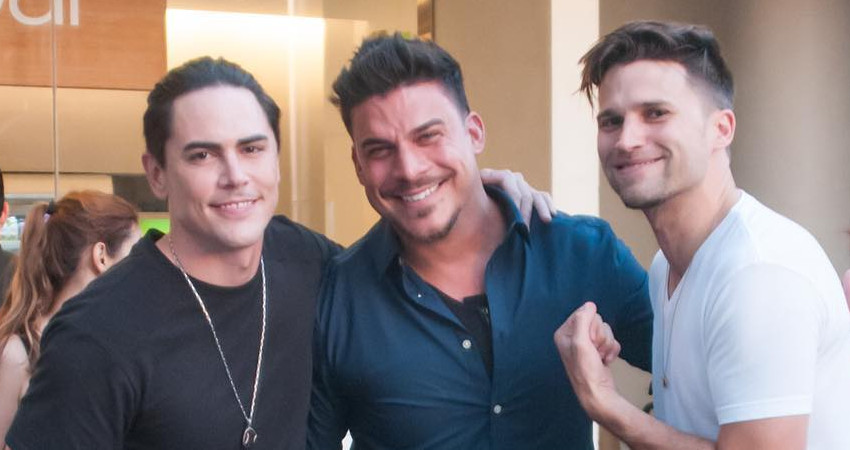 Vanderpump Rules has several ongoing feuds this season. Stassi Schroeder and Katie Maloney aren’t on the best terms with co-star Kristen Doute over her endless breakup drama. If that’s not a shot to the heart of longtime VPR fans, the bromance is over between Tom Sandoval and Jax Taylor.

As they’ve told fans many times, the former models met during their modeling days in Florida. In fact, when the bffs moved to L.A., Tom Schwartz crashed on their couch. The friendship of the three has been featured heavily in the first seven seasons of the show.

The friendship between Sandoval and Jax began to crack at the Season 7 reunion. Tom Schwartz also wasn’t happy with Sandoval, but the two remain close, despite their disagreement.

The disagreement started when the other VPR co-stars called James Kennedy out for his behavior, including body-shaming Schwartz’s wife, Katie. Sandoval and girlfriend Ariana Madix took James’s side, noting that Jax always gets a pass for his bad behavior.

Things got heated by the end of the reunion, with Jax and then-fiance Brittany Cartwright threatening to remove Sandoval from best man duties at their wedding. While Sandoval ultimately was co-best man with Schwartz, Jax has expressed regret at the decision, TV Shows Ace reports.

In fact, during this week’s episode, filmed before the wedding, Jax and Brittany discuss revoking Sandoval’s best man duties.

Looks like Sandoval's invite to the wedding of the decade may get revoked. #PumpRules pic.twitter.com/ing6tmv8Gp

Schwartz is close to both Sandoval and Jax. The TomTom co-owner opens up about the “awful experience” of being caught in the middle of feuding friends.

Jax has taken to Twitter a lot in recent weeks, attacking Sandoval from everything to how much of TomTom he owns to his relationship with Ariana. Schwartz feels that’s par for the course for Jax. He says,

He has a tendency to spiral. He’s kind of impulsive. He’s mercurial. He’s Jax Taylor.”

Schwartz does feel the two will get make up eventually, as they always do. If Sandoval can forgive Jax for sleeping with his ex… Schwartz explains their dynamic,

I know they love each other, but it’s been a constant in their relationship. They’re bickering a lot and they butt heads and they both have strong personalities.”

The reality star does admit that this fight is “more intense” than in the past. And it gets worse on the show before it gets better.

Jax isn’t the only VPR star angry with Sandoval. Lala Kent recently weighed in when a fan defended Sandoval for asking about the anti-gay pastor.

VPR Star Calls Out Sandoval for His Behavior

Lala may be excited about this week’s episode because her fiance, Randall Emmett, makes his VPR debut. However, she is not excited about Sandoval questioning Jax about the pastor situation.

If you missed it: Jax and Brittany are under fire from fans and Sandoval for not ousting the anti-gay pastor immediately. Rather, it seems the couple waited until boss, Lisa Vanderpump, became aware of the situation. Sandoval asked Jax point-blank at Peter Madrigal’s birthday party why they waited.

Cue Jax and the rest of the cast freaking out on Sandoval for ruining the wedding celebration.

A fan called out Lala on one of her Instagram posts for taking Brittany’s side after saying the same thing Sandoval did, except in private. Lala defended herself by saying there is a difference between disagreeing with what the pastor said and attacking Brittany’s character, which she believes Sandoval was doing.

The feud between Sandoval and Jax is far from over. Tell us in the comments if you’re Team Sandoval or Team Jax.

‘MBFFL’: When Will Whitney Way Thore’s Mystery Man Reveal Himself?
Kanye West Wasn’t As Committed To Kim Kardashian As She Is To Him
Is Natasha Parker Open To Being ‘The Bachelorette’ After ‘BIP’ Drama?
‘Sister Wives’ Janelle Brown’s Outlook Is Why Her Following Is Growing
Duggar Siblings: Jill Dillard Following In Sister Joy’s Athletic Footsteps?!