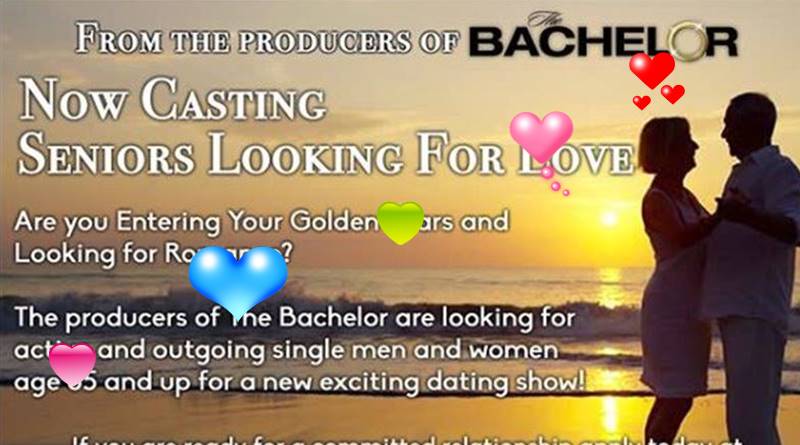 The Bachelor producers are working on a new show for seniors. The news came out in January, but now fans saw the commercial for it during Peter Weber’s episode of The Bachelor on Monday. Many fans reacted to the clip and some of them were quite amusing.

The Bachelor – Seniors Looking For Love

TV Shows Ace reported in January, that  Lindsay Liles, one of the producers of  The Bachelor, shared about it on Instagram. At the time, we noted that they’ll feature people aged 65 and over. They also made it clear that the applicants should be “active” and “outgoing.” When it comes to a name, nobody’s sure, so for now, people think of it as ‘Seniors Looking For Love.’

Now, with the new on-screen advertising for the casting call, fans talked about the new show on Twitter. One person suggested it couldn’t be any more boring than watching “Peter Weber try and make a decision.” Meanwhile, others suggested that they may be meant people over 30, or even 40. But, no, sorry, it looks like when they say “senior,” they mean your grandmother or elderly parent.  From the application site, it looks like they need to be a sharp senior as well, as people fill in a 54 point questionnaire.

Now Casting a new show! If you know anyone who is 65+ and looking for love please pass this on! We would love to hear from them! ❤️ #nowcasting (link on flyer and here: https://seniordatingshow.castingcrane.com and abc.com/casting has the link! )

Talking about the age-group, it looks like many fans of the ABC franchise like the idea of seniors. However, one witty person suggested they actually look for “high school seniors.” Another person noted, “Now looking for eligible seniors to find love: apply at…..” Mawmaw: “OH HERE I COME!!!!”‘ Another one asked, “Ummm…. #TheBachelor is casting a seniors edition?!?! Ok, but will this be classic bachelor style or like #BachelorInParadise ? I need to know!!!!”

In line with other enthusiastic fans, this person posted up the meme below, but again it looks like they interpreted it as high school seniors.

Bachelor for seniors?? I'm all for it !! #TheBachelor pic.twitter.com/o3ZDjCoudv

One follower of The Bachelor wrote, “I’m going to ask around at my elderly care facilities, anyone looking for love….” Then another person quipped, “You guys. You guys. You guys. Did anyone else just see the plea from #TheBachelor

Some people already started making jokes about the new show. One person posted, “What’s with all #TheBachelor spin offs? 2 weeks ago there was the announcement for the singing one and NOW there’s a bachelor for SENIORS. someone’s going to have a heart attack.

” Another fan commented, “Seniors looking for love?” Are they going to hand out a little blue pill instead of Roses?” Another one hoped there’ll be “no windmills.”

Fantasy suite invitations from @chrisbharrison on the new Bachelor for Seniors show will include a key AND a blue pill 😂 #TheBachelor pic.twitter.com/Ie1nwFFiuG

What do you think about the new show by The Bachelor producers? Do you think that makes for a fun idea? Would you like seeing your grandma competing for love with a whole lot of other older people? Sound off your thoughts in the comments below.

Remember to check back with TV Shows Ace often for more news about ABC’s The Bachelor franchise.