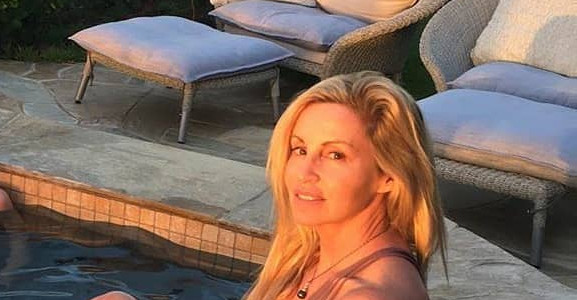 The Real Housewives of Beverly Hills star Camille Grammer is known to engage in a social media feud or two. Most often, the feud involves her co-stars, particularly Brandi Glanville or Lisa Rinna. However, her latest tweet has someone else in her crosshairs: ex-husband Kelsey Grammer.

Camille Grammer’s wedding to David Meyer may have aired on The Real Housewives of Beverly Hills, but she still has some ties to her ex-husband, Kelsey Grammer. The former couple share two children. Kelsey also has five children from previous relationships.

Kelsey and Camille were locked in a bitter custody battle for years. They were in court again last year over their son’s prep academy tuition.

The RHOBH ‘friend’ recently took to Twitter to call out dads who don’t pay child support. Many of her followers suspected that she was talking about her ex.

It’s good to know that there are great fathers unlike those who decide that they don’t want to pay child support and go above and beyond to find ways not to do so. #manipulate

Other followers shared stories of their own deadbeat exes. And some called her out for her privilege. One fan reminded Camille that she got a good chunk in the divorce settlement.

Exactly- Camille is worth 50 million dollars and complaining about CS! CS was created for woman who didn’t have the means to support a household without a second income. I’m not impressed by her trying to shame him for sport- pic.twitter.com/KafgX22tzm

The Cheers actor had a few appearances on the first season of RHOBH. However, by the second season, the divorce was in full-on war mode. The main delay in the divorce agreement was custody of the two then-minor children.

According to Camille, Kelsey suggested that one of the children live with him in Chicago while the other stayed in L.A. with Camille. Kelsey has always denied the allegation and ultimately Camille got physical custody of both kids. She reportedly also got a $30 million divorce settlement.

In the years since the divorce, the former Club MTV dancer has taken several shots at her ex. He generally doesn’t fire back, but he did accuse her of asking for a divorce on the day of his mother’s funeral. In turn, Camille denied it and accused him of “rewriting history.”

TV Shows Ace reported in November that Camille was at the center of Season 10 drama on RHOBH. However, now it seems that the alleged affair between Denise Richards and Brandi Glanville will dominate the season.

Speaking of Denise Richards, the RHOBH star recently opened up about rumors that she’s leaving daytime television. The actress appears on the CBS soap The Bold & The Beautiful.

However, her character was recently on the outs with the Forresters, leaving fans to wonder if her soap days were done. When a fan asked as much on an Instagram post of Denise’s, she responded.

The Bold & The Beautiful airs weekdays on CBS. The Real Housewives of Beverly Hills will return to Bravo sometime this year.