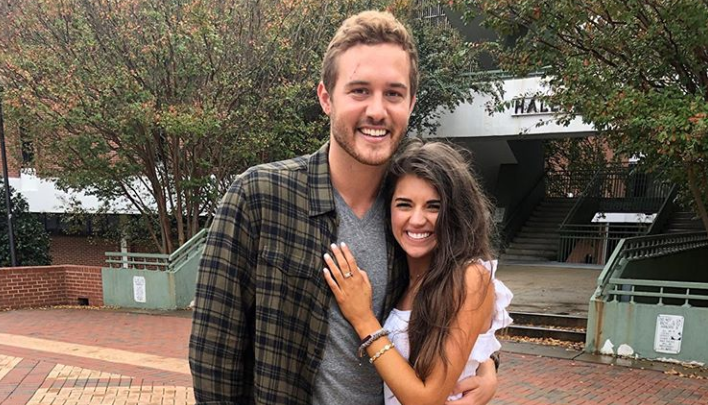 Madison Prewett has been a favorite on The Bachelor from the beginning. She’s genuine and seems laid back, but she also hasn’t been engaged in all the drama. She hadn’t told Peter prior to the latest episode she’d saved herself for marriage. In the beginning of the episode she made it clear to him she wouldn’t be able to move forward if he slept with the other girls.

Despite people asking why she came on the show, fans can see her logic. She went into Fantasy Suites hoping Peter would consider what she said and not be intimate with the other two girls. The week continued with both Hannah Ann and Victoria Fuller going on their dates before Madison.

Ball is life am I rite

It was clear from the way Madison Prewett started to act while Peter Weber was out with the other two girls, she really hoped he would take her words to heart. She stated, “Peter is a big boy and I trust him, and at the end of the day, that’s what I’m clinging to. Now the ball’s in his court, and he’s got some big decisions to make.”

When he and Hannah Ann ended the evening, they got together in the Fantasy Suite. It was assumed they slept together. The same happened after his date with Victoria Fuller where they’re shown in bed together.

Madison told Hannah Ann how she felt while Victoria was on her date with Peter. She said, “Peter sleeping with anybody else definitely makes me feel uncomfortable, and that’s just kind of what I voiced to him.” Madison was honest with him about what she wanted.

Hannah Ann said what a lot of fans have said when they found out Madison wasn’t comfortable with Fantasy Suites. She said, “I was thrown off by that. We knew what we signed up for. I knew, going into Fantasy Suite week, that it was going to be uncomfortable.” Making it more uncomfortable was the fact the three of them had to live together, which was a Bachelor first during Fantasy Suites.

Madison Stuck By Her Values And Stayed True To Her Word

Madison Prewett finally told him she was a virgin that night according to People. Some fans felt like she was pulling a Luke P who told Hannah Brown not to sleep with others. Other fans felt like it was different because she didn’t do it in a condescending or demanding way. She explained why she had committed to waiting. Prewett said, “I see it as the day that I say ‘I do’ to the person that I want to spend the rest of my life with is the day that he’s getting all of me, body, soul and spirit.”

She told him she couldn’t say yes to an engagement if he slept with someone else six days prior. In the end, Peter told her he’d slept with someone else. Madison excused herself and both of them cried. Madison said she was hurt and couldn’t change who she was. She said, “he knew coming into this week, because I had made it clear, that there was a chance that he could lose me if he made certain decisions and he made them anyways.” Despite Peter begging her not to, the episode ended with Madison walking away from him.

Nick Viall & Natalie Joy Take Huge Step In Relationship
‘OutDaughtered’ Fans Agree Parker Busby Wins In This Silly Photo
‘Teen Mom 2’: Chelsea Houska Has A New Look And Fans Are Not Happy
Briana DeJesus Just Got Engaged… Is It Already Over?
‘Outer Banks’ Season 2: When Is It Coming To Netflix?