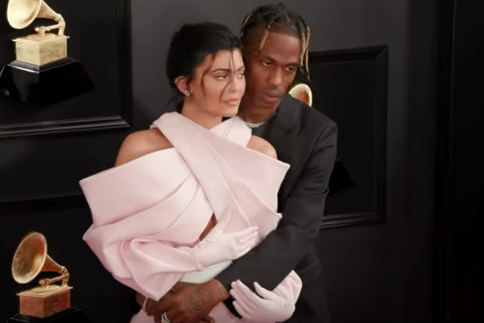 Co-parenting has become an easy game for Kylie Jenner and Travis Scott. They took Stormi Webster out together for some family fun, it looked like they were a really happy family.

They Do It All For Stormi

Thanks to Stormi, Kylie Jenner and Travis Scott have been spending plenty of quality time together. On February 23rd, the former couple reunited again with a family trip to a trampoline park and a visit to an ice cream shop. Even though the cosmetics mogul and the rapper aren’t romantically involved anymore, they looked like a perfect family unit.

The three went to Sky High Sports trampoline gym, then picked up some sweet treats at Afters Ice Cream. It was said the parents looked really sweet playing with their daughter while they took a walk around The Village in Woodland Hills. Kylie and Travis appeared to be very protective as they watched Stormi look at the koi fish in awe. As they enjoyed some ice cream, the three looked like a very happy family together taking in the sights.

Kylie and Travis were clearly very comfortable with each other and were very friendly, though they did not share any romantic contact. The two seemed to share a good mood and enjoyed a family outing together. A bodyguard accompanied them on their outing.

Kylie And Travis Remain Best Friends After Their Breakup

According to HollywoodLife, Kylie Jenner claims she and Travis are “best friends,” despite their breakup in October 2019. She says they have a great relationship, and they both love Stormi and want what’s best for her. The two stay connected and coordinated, she puts herself in the place of her parents. Kylie says they were very hands-on with her and that is what she desires for Stormi.

Jenner and Scott were recently seen at Disney World with Kris Jenner and Kourtney Kardashian for Stormi’s pre-birthday celebration.

Jenner spoke with Harper’s BAZAAR for their March cover story, featuring Kylie Jenner. Here, she described her relationship with Travis Scott post-breakup. She says they are still like best friends, after all, they share the same priority, Stormi. They both share a love for their daughter want what’s best for her.

In her interview, Jenner explained how she is teaching Stormi, who is only 2, how to handle being in the public eye. It’s something she thinks about a lot, the world is so strange these days. She ponders the exposure of the negativity of the Internet on her daughter. She reminds her that their family is blessed with the life they have been given and that it’s not a typical lifestyle.