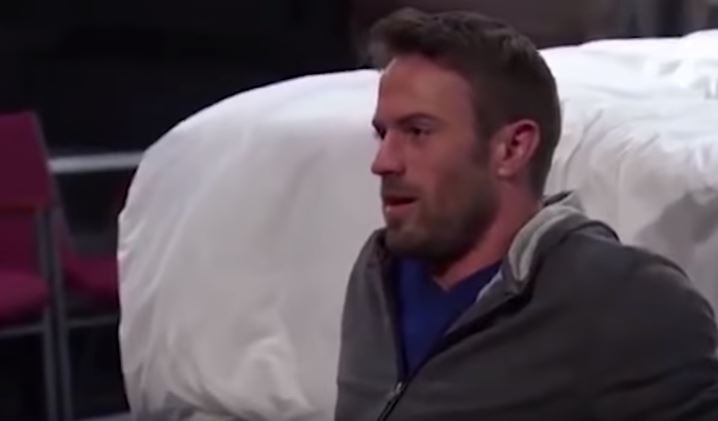 Bachelorette alum Chad Johnson spoke about getting his drinking under control around 20 days ago. Now, he allegedly punched a hole in his girlfriend’s wall. Plus, Annalise Mishler claimed he also assaulted her. So, he ended up arrested.

News about the alleged assault came via Instagram Stories, where Chad’s current girlfriend, Annalise shared some photos of a smashed wall. She claimed Chad did it and that he also assaulted her. That seems rather sad, as TV Shows Ace recently reported he seemed to be doing well with his drinking. On February 3, he posted to his Instagram about staying sober for 35 days.

At the time, The Bachelorette alum said that “every problem I’ve ever had in my life was caused by drinking.” But he noted that despite procrastinating a lot about getting off the booze, he felt wonderful. He added, “I’m healthy, happy… I’m always in control now.” Well, it sure looks like he wasn’t in control if the reports of his drink-fueled rage turn out true. In fact, he said to Too Fab that he can’t even recall the incident that Annalise claimed went down. Notably, though, he’s not denying it happened.

TMZ reported that Chad got picked up and taken away by the cops after they attended her 911 call. They found enough physical evidence to suggest that Annalise’s allegations had some grounds. She told them that “Johnson was drunk and not only punched a hole in her wall but also got physical with her.” Plus, the outlet noted that he allegedly attempted to get her phone away from her to stop her calling 911.

Chad, once known as a bit of villain in The Bachelorette now faces “felony domestic violence and robbery” charges, a source told TMZ. It seems the alleged drunken rage incident really traumatized Annalise, who took to her Instagram Stories again on Monday night to thank people for their support. Sadly, she noted that her little cat got so scared on the goings-on that it hid under the during the incident. However, she added that the cats “okay” and she’s “zen meow.”

Reality Steve cautions fans – this Chad is not the footballer

On his Twitter, talking about the alleged assault by Chad, guru Reality Steve reminded fans that they shouldn’t confuse Chad from the Bachelorette with the football player of the same name. In that thread, one person called out Annalise, saying, “@annalisemishler, have you never watched any Bachelor shows with @realChadJohnson? He’s abusive! Never think you can change anyone. He’s toxic.”

Update from Annalise regarding her situation with Chad Johnson she uploaded to her IG story last night. And yes, we’re talking about Chad Johnson from the “Bachelor,” not the football player. pic.twitter.com/ceogZXNURe

What do you think about the allegations that Chad Johnson punched a hole in the wall and assaulted Annalise? He says he can’t remember it. Sound off your thoughts in the comments below.

Remember to check back with TV Shows Ace often for more news about the cast of The Bachelorette and the rest of the ABC franchise.